I argued in a previous post about suicide that no person should be obligated to endure suffering for the sake of other people, except in cases where there are dependent children or elderly family members involved. What I left out of that discussion was a definition of "suffering." Today, there appears to be a great deal of individual and collective suffering, so what does that mean for you? 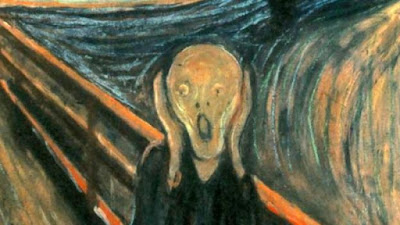 To clarify, I am not seeking a legal definition as it applies to litigation and damage-seeking monetary compensation. That may be part of the problem, actually. Societies with a capitalist economy want to assign concrete dollar values to everything, whether appropriate or not. We have come to measure all aspects of our lives in financial terms. That may create more suffering than it solves. It certainly adds unnecessary stress.

Is suffering like pornography, you "know it when you see it?" Maybe you know it when you feel it. There is certainly the pain of physical suffering, what detainees in camps along our southern U.S. border are faced with during their confinement, what the victims of natural disasters experience during and after catastrophic events, and of course the wounds of war, terrorism, and other acts of violence. Any physical trauma is likely to generate suffering of varying degree and duration.

There is also the unrelenting mental anguish during and after violence, the stress of anticipating the next episode of abuse at the hands of your domestic partner, the constant threat of harassment or violence if you are a woman, a person of color, a member of the LGBTQ community, or a practitioner of Islam, Judaism, or some other persecuted religion....the list of potential victims of suffering is almost limitless.

I would contend that suffering does not begin and end with these scenarios. Suffering extends to those who are empathetic to the abused, the oppressed, the undervalued, underprivileged, and poverty-stricken. People with White Privilege choose whether to be empathetic or not, recognizing that they, too, suffer as long as other humans do.

Suffering from empathy goes even farther. Many in our world are empathetic not just to other members of Homo sapiens, but to other species. I myself derive great joy from knowing that there are other organisms occupying our planet, leading fascinating lives and contributing directly and indirectly to the health of humanity in both the biological and emotional sense. Depriving caring people of other species through direct extinction, climate change, and habitat destruction is no less a crime than homicide.

Each of us has a different threshold at which suffering begins, and it is wrong to evaluate the suffering of others based on our own personal standard of what we consider to be suffering. Our American society is still far too entrenched in the mentality of machismo and stoicism when it comes to pain of any kind. "Suck it up," we like to say. Such condescending and dismissive rhetoric, and behavior, will unravel our civilization if it is not properly balanced with empathy.

In these troubling times it is tempting to withdraw, and indeed countless souls abandon Facebook and Twitter and other online communities daily to avoid facing a continuous onslaught of bad news and worse news. Turning a blind eye does not make reality better, however, and also deprives one of the latest positive news from friends, validation of one's own sensitivity, and, of course, humorous memes about pets. Seriously, we need to laugh more than ever.

Perhaps your challenge, like mine, is to not return to negative personal behavior patterns that you once used to cope with mental and social anxiety, fear, and depression. Remind yourself that those are expensive and wasteful exercises, both financially and physically. We need to be at our best and sharpest, and be engaged with the world for as long and intensely as we can tolerate, which is much more than we think we can. This is not the time to run away, turn to substances legal or illicit, or check out altogether.

Most importantly, we need to remind each other that, political and religious differences aside, we recognize our humanity and the need to work collectively. No politician, no corporate leader, no single individual has all the answers. It is us who will succeed or fail in protecting each other and the Earth regardless of what happens in Congress, the Oval Office, the next international summit. Make wise choices beyond the ballot, in your preferences in the marketplace, in how you treat others and how you treat yourself. You deserve positive things, tangible and intangible. We all do. To paraphrase Timothy Leary, we won't get any of those benefits if we tune out, turn on, or drop out. Stay alive, stay connected, heap praise on the worthy, reward true excellence, and think critically. That is how you end suffering.