That deflating sound you hear is my disappointment over the anticlimactic experience with that medical procedure that signals the beginning of old age: the colonoscopy. Here I was anticipating something similar to the ordeals suffered by the likes of Billy Connolly, Jeff Foxworthy, and Bill Engvall. Alas, there were few fireworks, but still a little comedic material in my case. 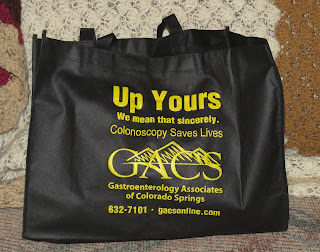 My general practitioner referred me to the Pikes Peak Endoscopy Center, and I was surprised that they could accommodate me within the month I called them. A week prior to the procedure I picked up my "prep kit," as shown in the image above. You can't say they don't have a sense of humor, however warped.

Everyone you consult prior to your colonoscopy will tell you the procedure itself is a piece of cake, but the preparation beforehand is a nightmare. In fact, the day before, you can't have cake. You can't have anything solid. The day before that you are supposed to be on a low-fiber diet. One bonus was the discovery that Ritz crackers have no fiber! It was a good excuse to go all meat and white bread, but if you like a more varied menu it was pretty boring.

The day before is the worst, though. You have to take an inordinate amount of laxatives, in a pretty short period of time. I expected this would amount to a liquid hand grenade detonating at my anus. Not so. There were maybe one or two projectiles ejected with minor force. No volcanic elimination described by our comedian friends.

Perhaps the whole "prep" thing has evolved and improved dramatically since the 1990s. Maybe I followed the dietary restrictions better than the average Joe. Whatever. The remaining laxative effects consisted of me being unable to tell if I was peeing or pooping.

So, I get to the clinic the day of the procedure. I was treated very nicely, I must say. The nurse took me into the room, told me to undress and put my gown on so it opened in the front. I told her she'd have to tip me for that show. She laughed and corrected herself, then asked if I might like a blanket. I said that would be nice, especially if my gown was open in the front.

The anesthesiologist wheeled me, in my bed, into the operating room where the doctor and another nurse were waiting. After introducing himself, the doctor dutifully re-iterated the risks of the procedure. I think I'd prefer that they leave me in ignorant bliss. Then the anesthesiologist said "Ok, this (anesthesia) works very quickly, and you will notice a metallic taste." (He shoots the drug into the IV). Me: "E-e-e-e-w, you're right, that does taste awf...."

That was the last thing I remember until I woke up in recovery. This may be why so many alien-abduction victims are over fifty. A nurse came in and offered a selection of snack items and beverages. The "Bottoms UP Cafe" provides a variety of gourmet blends, from "Lights Out Latte" to "Wake Me Up Before You Go 'Joe'." I chose a "Moon Me Mocha."

What was the result, you ask? Well, they did find and remove a small polyp that turned out to be benign but potentially cancerous. So, I'm cleared for now, but need to report back again in five years (instead of the ten year reprieve you get if no polyps are found).

I want to thank my doctor for being polite but insistent that I get this procedure done, and my friend Philip Kline for also being insistent. Lastly, I'd like to thank my wife for carrying me on her insurance from her workplace. Kaiser Permanente paid for the whole thing, which is as much of a relief as having the actual colonoscopy....dare I say....behind me.