A funny thing happened the other day on my way to taking winter snow images in Garden of the Gods park here in Colorado Springs. Just as I settled into position for a great scenic shot of Pikes Peak between two rock formations, a commercial jet arced over the mountain, dead center, leaving a bright contrail in its wake. 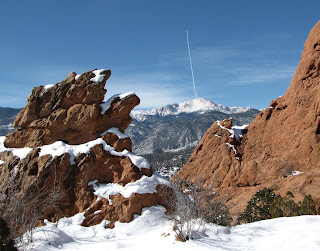 Timing really is everything in a case like this. Had I gotten my butt on the road even a few minutes earlier, the morning light would have been even better, and there would have been no ugly airline graffiti. I am sure the navigator aboard the aircraft would argue the plane was not at all “misplaced,” but I would beg to differ, from my vantage point on terra firma.

I pride myself on not retouching any of my images with digital software like Photoshop or GIMP, and I am still debating on whether to bother in this case. People viewing a manipulated image would never know the contrail was there, but no matter what I do to obscure or erase the “defect,” I would still know. I literally “can’t un-see that!” It will always be an indelible vapor trail in the landscape of my mind.

That is what really bothers me, I think. Any time afield, no matter what the results, is time well spent, but a true wilderness experience is getting harder and harder to come by. It is nearly impossible to avoid litter of some kind, and then there are those planes. I have to wonder how many flights I have been on that spoiled someone else’s photographic souvenirs 30,000 feet below me.

Yesterday I walked the dog around our complex of townhouses, just after another snowfall. Ours were the first footprints, even on the sidewalk. I have to admit it was both exciting to be a momentary pioneer, and disappointing to spoil the pristine cover of white.

Sunday, February 17, my wife and myself and Debbie Barnes of the Aiken Audubon Society set out to find a flock of Bohemian Waxwings that had been seen the day before at the U.S. Army Turkey Creek Recreation Area south of Colorado Springs. We did not find them. The outing was, however, far from a total loss. What we lacked in waxwings we more than made up for in bluebirds. 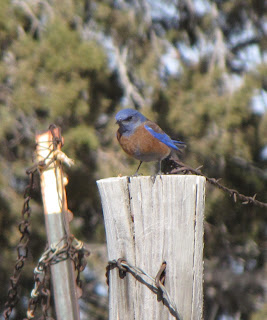 Our first stop was at the intersection of Barrett Road and Highway 115, where the Bohemian Waxwings had been seen most recently. No sign of them despite a fair crop of juniper berries in the area. Upon exiting back onto 115, we did spot a pair of birds on a telephone wire. They were quickly identified as male Western Bluebirds, Sialia mexicana. One of the two birds obligingly glided to the ground, then popped back up to sit on a fence post about thirty feet from our vehicle, affording the view shown above.

We backtracked to the Turkey Creek Recreation Area, pulling into a playground area with a collection of buildings and the stables where horses for the mounted color guard reside. A Lewis’ Woodpecker is known to hang out there, too, and was sighted earlier in the day, but was a no-show when we were there. No waxwings, either, just more Western Bluebirds, a Common Raven or two, and a flock of Dark-eyed Juncos. 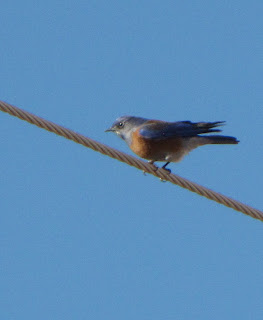 While taking in the austere scenery, Debbie connected with another birder friend, Jeannie Mitchell, via cell phone. Jeannie was kind enough to share that news that a group of birders who were in Turkey Creek that morning had seen a huge flock of Mountain Bluebirds, Sialia currocoides. I admit I was skeptical, but we followed the appropriate road and…. 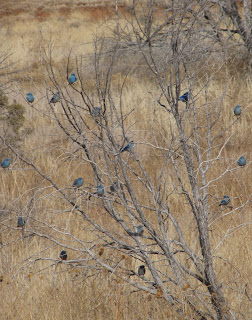 Sure enough, here were probably at least 200 Mountain Bluebirds, distributed on each side of the road. A handful of American Robins, Turdus migratorius, were in their ranks, but the sight of all that turquoise blue was jaw-dropping. One dead tree in particular was essentially festooned with living, feathered ornaments. 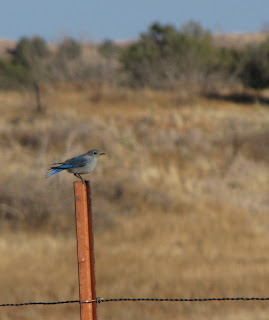 By now, around 4 PM in the afternoon, the wind had gotten gusty, the sun lower, and the temperature was dropping. Reluctant to leave, we took it slow and found still more Mountain Bluebirds in a vast open field studded with old yucca and mullein stalks, plus the obligatory barbed wire fences and metal fence posts. Various Mountain Bluebirds took turns alighting on all available perches in really great light. 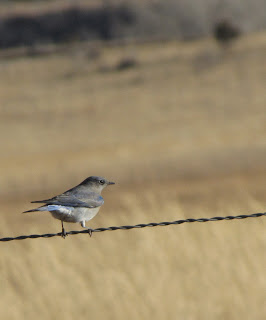 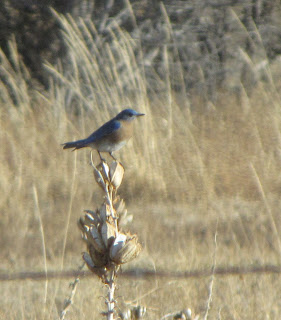 Bluebird trifecta! Looking at the distribution maps for bluebirds in the various field guides, one would not guess that the Eastern Bluebird ranges this far west, but here is proof to the contrary. There are always strays, of course, but as habitat, climate, and other factors change, birds adapt and their geographic ranges change accordingly, even from week to week. The convergence of all three species here is now a regular occurrence, especially at this time of year.

Debbie mentioned that bluebirds are feeding on juniper berries when flying insects, grasshopper nymphs, and other prey is not readily available. Cold fronts may push the birds into protected valleys and other warmer situations, but they quickly return when the temperatures warm up again. Sounds like me.

Of Birds and Blades

I like birds, I really do. I am also a strong proponent of renewable energy like solar and wind power. Imagine my dismay at finding many of my birding friends denouncing the huge wind farms popping up all over the place these days. Ok, the objections are mostly concerning the location of the big turbines, but the arguments are not going to end well if taken out of context as the press is prone to do. 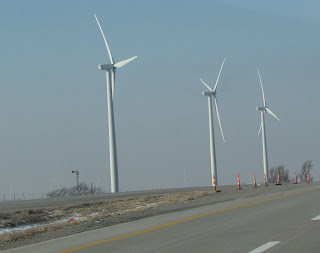 There are two problems that occur to me immediately. One, if “environmentalists” first object to traditional energy sources like coal, gas, and oil, but then start whining about commercial pursuit of alternative energy, they lose credibility and are dismissed as “NIMBYs” (Not in my Backyard). Secondly, if we invest too heavily or too quickly in a technology that demonstrates itself to have severe detrimental side effects, then we are back to square one on all fronts.

No question, oil, coal, and gas involve truly horrific extraction procedures and equally risky transportation methods. Time and again we have seen the outcome in the form of petroleum-soaked pelicans, black beaches, mountain-top removals, and other disasters. Virtually anything is better than that. A recent online article and chart from Mother Jones purports to show that wind turbines kill just a few birds compared to the mortality inflicted by…..cats. 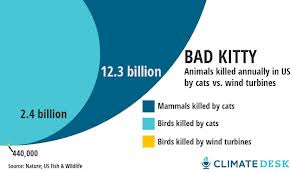 Naturally, any bird fatalities attributable to humans, or their pets, is intolerable to many in the birding community. Here is another article, in PDF file format, that offers statistics on bird fatalities associated with cell phone towers. There seems to be no end to the number of ways we are killing our fauna, including automobiles, airplanes, and wanton executions at the end of (insert random weapon here).

I am not saying I am in favor of preventable slaughter. There are alternative designs for wind-driven devices that harness power. Raymond Green has created one that looks promising. The roadblocks to its manufacture at any scale will undoubtedly come from the companies making money with the status quo. That is what must change: Our corporate addiction to whatever is making money at the cost of everything else. We need industries to be flexible to accommodate new findings and better ideas that benefit humanity as a whole, and are sustainable.

I will continue supporting wind energy, and promote safer designs. I will also always love cats, but agree that they should be kept indoors, and/or walked on a leash. I will also continue opposing the stock market as the driving force of our society. It is driving alright, driving down wages, driving through consumer rights, and driving our natural environment to hell. I’m all ears when it comes to an alternative to that. 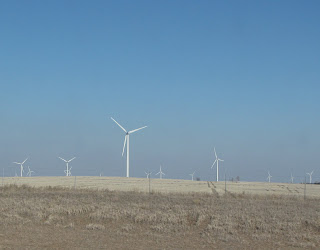