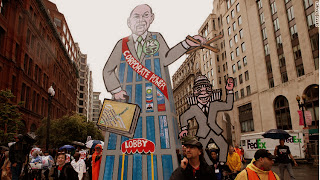 I think it was during the last presidential election, with concurrent elections of senators and representatives, that I suggested to my wife that we should draft congressmen and elect people to go fight in wars. At the time I was joking, but the idea is growing on me with every 60 Minutes story of congressional abuse of power. If we truly want a government of the people, by the people, and for the people, then we the people need to step up and into positions of leadership.

The overwhelming problem, it occurs to me, is the co-opting of our congress by corporate interests that have only the interests of profit and shareholders at heart. That status quo is more than endorsed by both the Democratic and Republican parties. We need senators and representatives more connected to the average person.

We have had outstanding public servants in the past, but many of them have resigned in disgust over the current in-fighting between political parties and their various factions. There is little evidence this will change without a complete overhaul in how we go about choosing members of congress.

I propose that from local school boards on up to the federal level, we consider drafting people into those positions. At least draft two or three candidates for each position. Law enforcement officials, mayors, governors, and the President of the United States would be elected in pretty much the same manner as they are now, with appointments to Cabinet positions at their discretion. The benefits of drafting others to serve would be many-fold:

This idea of a political draft is certainly not flawless, but if it even generates a discussion on how we can refine our current system and put power back in the hands of the public, I’ve accomplished my mission. Our country and its citizens are too important to allow the continued gridlock and excesses that we see in today’s government.

We cannot continue on our present course of keeping the status quo. We know the hazards of natural resource extraction, for example. Clean energy cannot wait. We know there is “equal opportunity” in rhetoric only. We know we need to set a much better example for the world, while understanding there is no shame in borrowing ideas from the states, or even other nations. We should be fearless, but not reckless, in innovation, and fund basic research to make that innovation happen.

If public service is no longer something anyone aspires to, then it is time to turn the system on its head so that it at least has a chance at commanding the respect it once did. History can repeat itself in good ways as well as bad ways.