I have no idea whether God exists or not, but I’m fine with either scenario, and whatever opinion you hold. I wish more people felt that way, it would take a lot of the pressure off the holidays. Capitalism most certainly exists, but I don’t worship at that altar, either, as best as I can avoid it, anyway. Christmas is the perfect storm of religion and economics, so it is no wonder everyone feels angst. We waste too much energy on meeting the expectations of others, and berating ourselves for not fitting in. 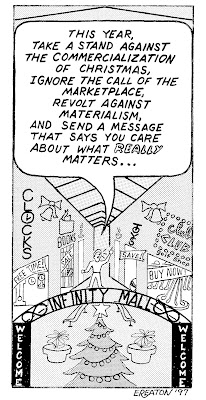 Pardon me if I do not have patience with Christians who claim persecution, who complain there are not enough Jesus ads on television at this time of year. What I have a problem with is promotion of the idea that your brand, your religion, is the only way to believe in, and revere, God. Oh, and by the way, if anyone is being persecuted it is atheists, who understandably buy into nothing. The continued existence of anti-Semitism suggests even Judaism is only tolerated. Every other belief system is pretty much considered blasphemous.

Modern Christianity continues to foster patriarchy, colonialism, and white supremacy. Our Father, for example. My own father was not a good human being, so how do you expect me to relate to a paternal deity? Missionary work is the continuation of colonialism, the effort to erase indigenous belief systems and the cultures that arose from them. I know you don’t see it that way. You believe you are doing humanitarian work, and in terms of disaster relief, economics, and infrastructure, you may well be. That does not excuse you from the hostilities of attempted conversion. You are literally being the “white savior” that nobody wants.

What we need is acceptance of those with differing beliefs, and non-believers (though that label is troubling), not mere tolerance, which implies grudging, condescending acknowledgement of “others.” I have no interest in thoughts and prayers that come from a place of self-righteousness. Please stop using the supposed word of God to justify the very human, earthly agenda you want.

Hey, capitalism! Get back here! I’m not finished. You do not get off that easily. Congratulations on eclipsing the religious importance of the holidays, though. That takes some genius marketing, and bending of some historical traditions, me thinks. You’ve gone a bit overboard, though, in converting us to extravagant consumers. Too many have bought into the idea that material goods trump acts of kindness, that services are purely economic and must always command a price.

Capitalism, you have even managed to create the grand illusion of a “middle class” that is, in reality, a debt class, propped up by borrowing, and credit from the gods of Visa, Mastercard, and Capital One. The Joneses are not even keeping up with themselves any longer. Image is everything, though. I believe that is one of your bible verses, in fact. Your churches are casinos, the corner store that sells the lottery tickets, the payday loan offices, and lawyers who will pimp frivolous lawsuits to make up for your lack of a living wage. You can take all of them to hell with you.

Economies are essentially redundant, artificial ecosystems in which one species, Homo sapiens, fills all the niches, the currencies have arbitrary value, and those monies are hoarded. In nature, the only currency is energy, with consistent, measurable value, and it circulates freely, as it must in order for living organisms to thrive and reproduce. Economists would do well to remember that. We should have evolved, by now, economies with intangible currencies. Peace and love? Lord no, we cannot even agree on definitions for those concepts. Honesty, maybe? We need to first free our minds of what we have been led to believe is the “only way.” Sound familiar, religion?

This holiday season, my heart is, as usual, with those harboring needless guilt over differing beliefs, and the stress induced by the expectation of material gift-giving. You are under no obligation to please anyone else. You have no responsibility to provide material goods to anyone else, with the exception of your minor, dependent children. Above all, you have responsibility to your mental health, an obligation to being an example of positive self-care. Do that and the ledger is good.