Have you ever wondered what constitutes a “duck pond?” Is it the mere presence of waterfowl? Is it over a certain number of acres, or under a certain number? Perhaps it is always an artificial pond, constructed as a decorative landscape feature. The “lake” at the intersection of Interstate 25 and Circle Drive/Lake Avenue in Colorado Springs certainly fits the bill on all counts. 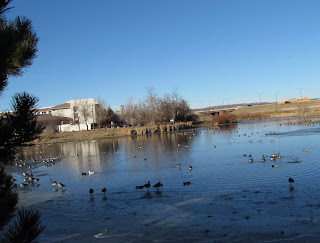 Heidi had been watching the “rare bird alert” for Colorado and discovered that a Long-tailed Duck, Clangula hyemalis, had been spotted in this most improbable of locales. You just can’t get any more urban than this: a pond situated right off a major freeway, with a Doubletree Hotel and Tinsel Town cinemas being the most prominent nearby features. Yet, there it was, this wayward migrant. The duck formerly known as the “Oldsquaw” normally spends the winter along the extreme north Pacific coast, from BC to Alaska, and the Atlantic coast as far south as North Carolina (though scarce). It breeds in the Arctic, spending the summers there. 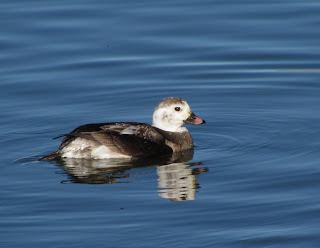 This specimen was without the trademark long tail, but there was no mistaking that pink-and-black bill. We were pleasantly surprised that the lake was small enough to allow us to get really good views of all the species of waterfowl there. Here on the Front Range, there are not that many wetlands to begin with, and most are large reservoirs that do not allow anything but long-distance views of birds requiring spotting scopes and high-powered binoculars. 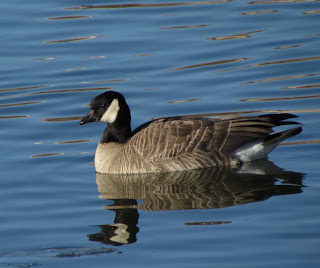 A large flock of the Canada Goose, Branta Canadensis, dominated the lake, and you have to watch where you step lest you return home with goose poop on your shoes. Beyond the geese were good numbers of the Common Goldeneye, Bucephala clangula, Ring-necked Ducks, Aythya collaris, and a small number of Canvasback, A. valisineria. A few Mallards were there, too, of course, and a handful of Hooded Mergansers, Lophodytes cucullatus. Oh, and at least three Northern Shovelers, Anas clypeata. 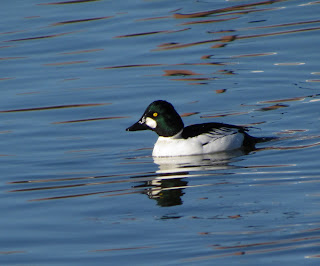 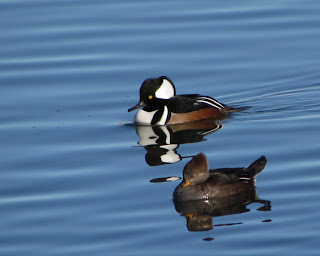 Heidi has sharper eyes than I do, and she spotted something equally out-of-place. She managed to get a picture, but we are getting conflicting opinions as to whether the bird depicted below is a Greater or Lesser Scaup. Lessers are not uncommon summer residents here in central Colorado, but should be wintering farther south. Greaters are again coastal birds that should have no business this far inland. 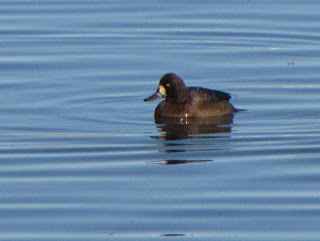 The western edges of the pond were already covered in ice, but with days now getting longer, we hope to return regularly to look for more ducks and geese on the remaining open water. It sure beats longer road trips to Chatfield Reservoir and even Fountain Creek Regional Park where we have seen far lower numbers and diversity of our fine feathered friends.