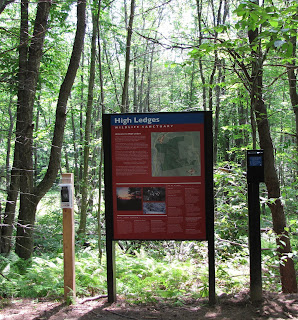 Thanks to my friend Steve Gingold I have had the pleasure of visiting the High Ledges Wildlife Sanctuary on two occasions so far this year. The refuge is located just outside of Shelburne Falls in Franklin County, Massachusetts and operated by the Massachusetts Audubon Society (“Mass Audubon” as they call it here). It is a property rich in both history and natural history.

Dr. Ellsworth “Dutch” Barnard grew up on the family farm established here in 1790. Portions of that property were included in the original 400 acres donated to Mass Audubon. Dutch taught English from 1930-1933 at what was then Massachusetts State College. He would return after decades of other professorial positions to teach at UMass from 1968-1973. He and his wife Mary spent the summers in a rustic cabin at the summit of the “Ledges” for more than fifty years. The cabin burned down a few years ago, but the chimney and a couple rock walls remain. Here is the view they enjoyed of the Deerfield River valley: 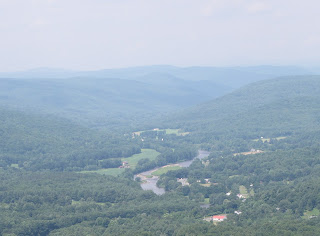 Dutch and Mary didn’t take it easy, either. They actively constructed the trails that are maintained to this day, and also identified the many plants and animals that call the sanctuary home. Twenty orchid species are known from the nearly 600 acres now encompassed by the boundaries of the reserve, and thirty species of ferns have been found there as well. I confess I didn’t even know there were that many kinds of ferns.

I saw my first pink lady’s slipper orchid there on our first trip, June 6, and this brilliant wood lily on July 11: 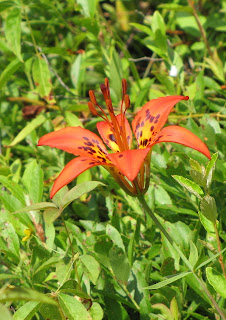 If you can’t visit the area yourself, and I highly recommend it, consider reading Ellsworth Barnard’s book In a Wild Place: A Natural History of High Ledges, illustrated by Charles H. Joslin, and published by the Massachusetts Audubon Society in 1998. You can also see some of Steve’s magnificent nature images from High Ledges and elsewhere at his photography website here. Thank you, Steve, for the transportation and sharing your special places with me.

My friend Jeff Boettner tells the story of how he and his wife Cynthia were visiting Whitefish Point, Michigan during the hawk and owl migration when they met a woman coming back from the dunes. They asked the lady if she had seen anything exciting. She said that others claimed to have seen “a pair of green falcons," but all she saw was one bird.

I don’t have to go all the way to Michigan to see peregrine falcons. There is a resident pair right on the University of Massachusetts campus here in Amherst. They tend to hang out around the Campus Center, which has a high-rise hotel in the middle of it. One morning I spotted one of the birds perched on a light jutting out from the building. I ran back to my lab to get my camera, then spent the next half hour chasing the bird and its mate around the building. All I managed were a few shots from roughly 200 vertical feet away in bad light, including my specialty, “silhouette of bird leaving.” 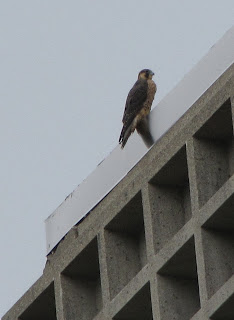 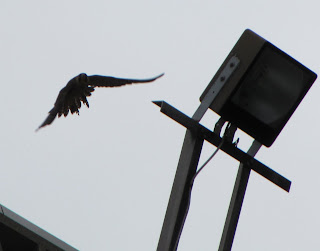 Ok, I got a few shots and a backache.

As natural nesting sites have dwindled due to development and habitat fragmentation, it occurred to wildlife officials to try introducing falcons to the next best thing to a cliff: a skyscraper. “Hacking” is the term used to describe the process of releasing young falcons raised in captivity from a cage-like shelter placed atop a building. This has worked so well that falcons across the country are now returning on their own to nest in their birthplace cities, using buildings and bridges as sites for nesting.

The pair here on campus has chosen to nest atop the W.E.B. DuBois Library, a building that must be the tallest structure in the state west of Boston. You can’t see the top of it on a foggy morning. The Campus Pond below the library provides plenty of waterfowl for these “duck hawks” to feed on, though they are more apt to go after slightly smaller game like pigeons. There are remarkably few pigeons here, actually, and now I know why. I wonder if the Massachusetts Division of Fisheries and Wildlife would consider loaning some falcons to Tucson?

Should the falcons successfully launch their offspring (and I’m pretty sure I saw a fledgling this past Wednesday), it would mark the twentieth bird to have been reared here.

Meanwhile, on the evening of Tuesday, July 14, I saw the adult falcons over my neighborhood in South Deerfield. I even have a grainy image to prove it: 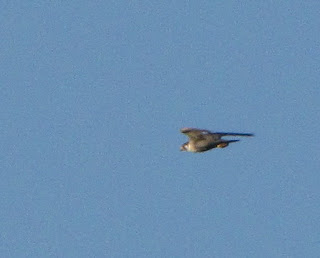 Well, I thought it was the pair from the university. It turns out that there is another male and female nesting on Mount Sugarloaf just down the street. So, I can’t be sure just which birds I was looking at after all. Hey, after decades of declining raptor populations from the effects of DDT, it is a pleasant quandary to have two pairs of peregrines to tell apart.

For more about the UMass couple, see this online article. Watch this space for more falcon memories from yours truly.

Remember those foxes living behind my residence that I showed you about a month ago? Fat chance I’ll ever see them again. They are (were?) living at the edge of an enormous vacant area that is the former site of a pickle factory, long since torn down. The weeds, wildflowers, and sapling trees had grown up fairly tall, perhaps owing to the large amounts of rain we’ve been getting here in South Deerfield, Massachusetts. Well, apparently we can’t have any of that. Tonight I discovered that somebody in a tractor (the tracks were evidence of that) mowed the entire area. That act has effectively ruined my after-work life of exploring in these days when the sun lingers until around 8:30 PM.

Citizens of the United States have become entirely too good at destroying urban, suburban (and increasingly, rural) wildlife habitat in the name of cosmetic appearance and liability issues. It is this latter notion that has really gone over the top. God forbid that a mosquito carrying West Nile virus, or a tick harboring Lyme disease should be lurking in the tall grass waiting for some poor soul to walk by. We certainly can’t afford to have a dead tree fall on a parked vehicle, or the roots of a living one buckle the sidewalk where a person could trip and fall. We collectively no longer tolerate risk of any kind from natural sources.

Meanwhile, our culture celebrates stupid risk, be it the stock market, legalized gambling, or extreme sports. Nature must be conquered in eco-challenge reality shows, but the natural world must not be allowed to fight back.

Neighborhood associations and government municipalities are also keen on instituting codes of uniformity for the appearance of yards, gardens, lawns, playground structures, and the exterior of homes and buildings. The result is a sterilization of nature, the introduction of hoards of exotic ornamental plants and their associated insect pests, and the release of who knows how many chemicals into the environment from the application of fertilizers and pesticides.

Weed ordinances provide for stiff penalties if your grass exceeds a certain height, or the clover, daisies, and Queen Anne’s lace compromise the integrity of your lawn. Well, I am here to tell you that one man’s weed is another man’s wildflower. The clover actually benefits your lawn, by the way, by fixing nitrogen and making it available to the grass. As far as I’m concerned, though, the “weeds” are those very lawns, a blight of turf in a land meant for meadows and and glades

I have an idea for a cartoon I want to draw and submit somewhere. It starts with a panel depicting a man sitting on his front porch watching a conflagration in his yard. The next panel shows his neighbor rushing to the fence and screaming “Your lawn is on fire!” In the final panel, the man casually replies “It’s a prairie.” That will be the day my friends.

”Oh, you’ll be there at a beautiful time of the year!” That is what people kept telling me when I told them I was moving temporarily to western Massachusetts at the end of May. Well, here it is at the beginning of July. Yesterday, in fact. Does this look beautiful to you? 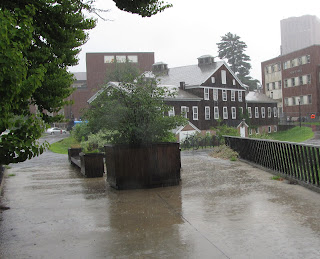 I shouldn’t be complaining since I’m gainfully employed, doing meaningful work no less, with great people around me on a really nice campus full of resources at my disposal. I really didn’t expect day after day of overcast skies, though, with rain nearly every day as well since I’ve been here.

”This is highly unusual weather we’re having” people here keep telling me. Sure. Whatever. Just wake me up when it gets over eighty degrees please. It has been there already, to be truthful, I just can’t remember when that was.

The dim light on cloudy days has made taking clear images of insects nearly impossible, and that is when the breeze isn’t blowing. This is where I would benefit by knowing how to configure camera settings on my own, but I honestly don’t know when I’d have time to learn. It is all I can do to keep up my blogs.

Tonight at the local restaurant (Wolfie’s in South Deerfield, highly recommended) I overheard a family at another table talking about the weather. “If this was snow we’d had over the last month-and-a-half, I hear it would be eighty inches” the woman said. Well, I guess I should be grateful for small favors, though this morning I actually dreamed it snowed, though briefly….