”What the….?” must be the reaction of many a motorist sharing the highway with this RV, decked out in snazzy graphics depicting North American wildlife, especially insects. The story behind this rig is truly intriguing, and we owe it to our neighbors to the north for coming up with the idea.

I had the pleasure of spending a day with the Bio Bus team at Picacho Peak State Park north of Tucson, Arizona on April 20, 2010. It was the culmination of a desire to meet one of the members of the crew since about 2002. 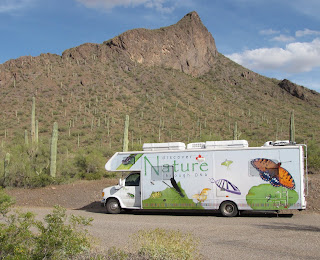 While soliciting photographers to contribute images to the Kaufman Field Guide to Insects of North America, I had the good fortune to cross paths with Jay Cossey, a professional nature photographer in Canada. He has stayed in touch ever since, and was delighted to inform me that he had gotten this job a couple years ago. Jay figured that at some point the Bio Bus would be passing near Tucson, and sure enough, here it was.

The Bio Bus is a research effort of the Biodiversity Institute of Ontario, based at the University of Guelph. It has been on the road since 2008, traveling across Canada for the most part, but also venturing into the U.S. as spring and summer slowly creep northward. The goal of the mission is to collect mostly invertebrate specimens for DNA “barcoding,” a method by which one gene with species-specific variation is used to identify a species. The result is that many “species” formerly recognized by mere morphological (physical) characteristics turn out to be a complex of species that are discernable only through genetic analysis.

The RV, which rides like a dream, amazingly enough, can accommodate four people along with all the gear necessary for navigation, collection, and day-to-day living. Graduate students and others rotate along the route, but Jay has been a pretty constant presence since last year.

This year’s organizer, Jill, has been there, too, making certain that permits are secured for collecting in state and provincial parks, making contacts ahead of the bus’s arrival, and generally being an incredibly diplomatic ambassador for the project. 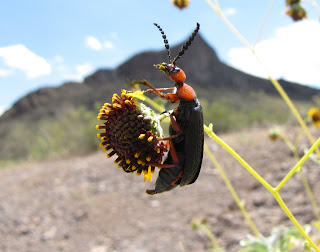 Our day at Picacho Peak was reasonably productive, though the most abundant insects were large blister beetles (Lytta magister) that eventually became rather annoying with their droning flight drawing our attention from other creatures. We ended the day with a tasty dinner at a steakhouse in Tucson. 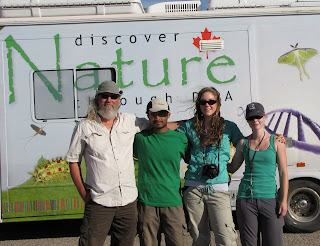 Thank you Jay, Maneer, Rene, and Jill for the warm welcome and camaraderie in the field. May you have a successful journey up the west coast and back across Canada this summer.

Please visit the Bio Bus website. Also, be on the lookout for a “Gigapan” of all of us atop the RV at Gigapan.org. Hopefully, one of those big blister beetles didn’t fly in front of the lens…. 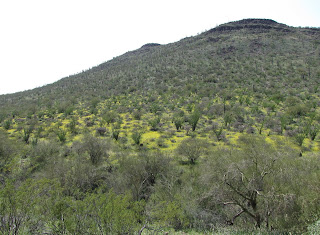 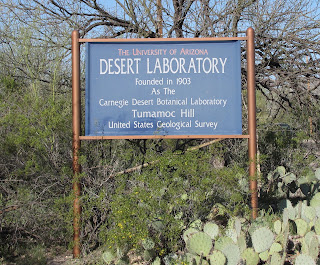 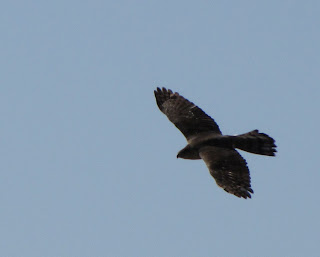 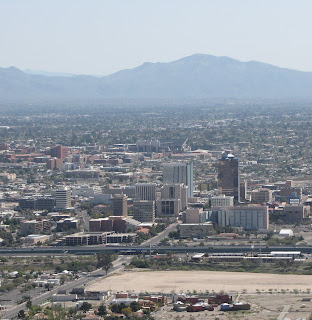 The Southeast Arizona Butterfly Association had a field trip to Pima Canyon last Saturday, April 3, and I was privileged to be invited to go along. I wish to thank Fred Heath for furnishing transportation. Our small group was looking mostly for butterflies, of course, and we collectively saw twenty-one species, but it was the incredible variety of wildflowers that got our attention most of the time. 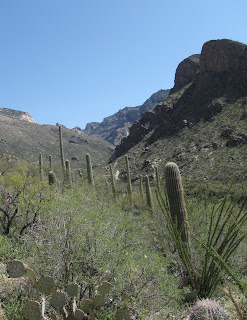 Fred is very knowledgeable regarding the flora of the Santa Catalina Mountains, where Pima Canyon is located, and he was able to name most of the flowers, and find cryptic ones. I passed right by this larkspur (Delphinium), for example, assuming it was “just another lupine.” 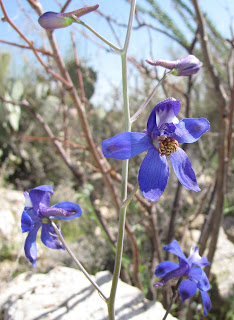 Most of the time, this canyon runs dry, but the winter rains and snowmelt this year have the water cascading down the stream in abundance. The extra moisture meant that we saw flowering plants typical of more moist riparian zones. Take this common monkeyflower, Mimulus guttatus, for example. 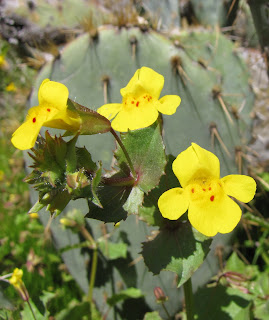 The flowers, in turn, did offer nectar for many of the butterflies we observed. 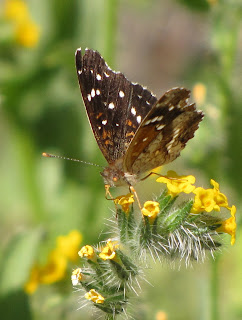 This Texan crescent, Phyciodes texana, was flitting from blossom to blossom on the common fiddleneck (Amsinckia menziesii) that is so abundant right now.

Pima Canyon is just a short drive outside of Tucson, and a very popular spot for hikers, so it can be a bit crowded on weekends. Just the same, I encourage visitors to southern Arizona to consider this scenic canyon as a potential day trip. It takes a bit of time to get into the heart of the canyon, but once there the shade afforded by the cliffs, cottonwoods and other trees is a welcome relief from the heat. You can always cool your heals in the creek, too, provided it is running, of course. 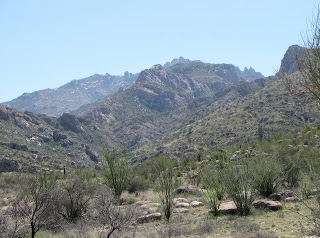 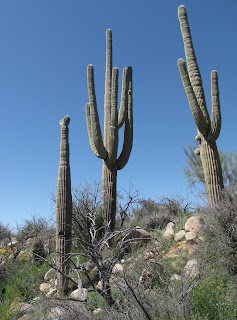 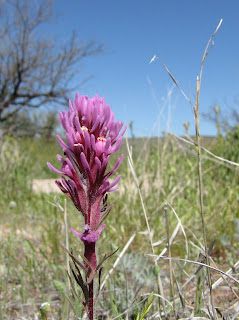