I had dismissed Prospect Lake in Memorial Park as just another fake lake in the urban landscape, not worth my time if I wanted to find any wildlife other than Rock Pigeons or European Starlings. Thanks to a Facebook group for the Colorado Field Ornithologists, I found out my assumptions had no validity whatsoever. 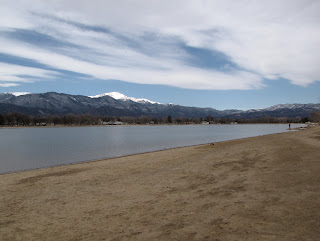 About the middle of last month, posts to the group included sightings of the most improbable birds you could imagine: American Avocet, Mountain Bluebird, even American White Pelican. Grebes of at least four species were common. There were pictures of several species to back up the claims.

It is embarrassing to admit that Memorial Park is only about three miles from my home, near downtown Colorado Springs. Yes, Prospect Lake is a large, artificial reservoir, dutifully stocked with trout for fishermen, and with boat ramps to facilitate water skiing, but the water level is low right now, and the boathouse is not yet open for business. I should have paid closer attention. 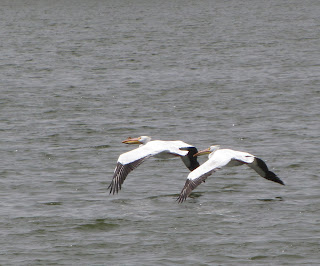 After reading the posts to the ornithology group with my jaw on the floor, I decided I needed to see for myself all the bird diversity. Apparently, on April 19, I was one day too late for the midge hatch that had attracted the large number of birds the previous day. I was still impressed even so. The pelican flock was still there, plus more waterfowl and gulls than I could count. At one point I counted six Ospreys in the air at once. It was like they were lining up and taking turns at the trout….at least until the Bald Eagle showed up and frightened everybody else away.

The land that is now Memorial Park was donated to the city by General William Jackson Palmer in 1890. Prospect Lake was excavated shortly thereafter. Initially, the reservoir was used to supply water to the Evergreen Cemetery, but that need expired in 1950. The water that fills the lake is extracted from the nearby Fountain Creek, a local watershed. A Naval Reserve station occupied the southwest corner of the lake from the late 1940s until the late 1980s. Plans to turn the entire lake over to naval training exercises in 1950 were thwarted by locals who enjoyed recreating on the rest of the lake. The Colorado Springs Fire Department used the armory for training after naval training facilities moved to Fort Carson, but after 2001 all the buildings were abandoned and demolished.

The lake began losing water at a high rate in 2002 when the pipeline supplying the lake was shut off, a severe drought was happening, and the liner for the lake became torn. A movement to add Prospect Lake to the National Register of Historical Places was successful, and spurred action to replace the liner. The lake was refilled and again stocked with fish in 2005, and it remains a vibrant center of recreation today. 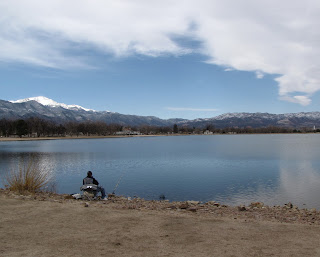 The lake is surrounded today by playgrounds, including the state-of-the-art “Swing High” totally accessible playground, plus lawns, ornamental pine, cottonwood, and other trees, ballfields, residential neighborhoods, and commercial real estate. Despite all the hustle and bustle, birds seem to enjoy the area, at least in migration this year.

I am a novice birder, and I know other species were seen, and have been seen since. Warblers, for example, are only now starting to appear. It just goes to show that you can still be surprised by nature close to home. Really, really close to home.