This post takes up where Part 1, on my sister blog ”Bug Eric” leaves off. The seventh annual “Butterfly Magic” kicked off with the suave and swanky “Butterfly Affaire” fundraiser on Sunday night, October 10. Music, fine food and beverages were the order of the evening, but at least a few folks ventured into the hot and humid greenhouse in their gowns and suits (though most were dressed a little above “business casual”).

The butterflies had mostly settled down to roost for the night, making them difficult to spot. The lights were on in the tropical greenhouse, but insects are not easily fooled by the artificial extension of natural day length. Consequently, the hit of the night was a group of recently-emerged African Moon Moths, Argema mimosa. 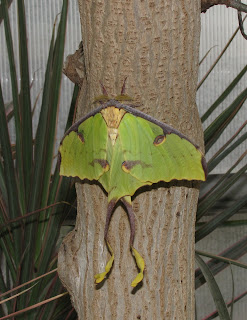 These large, showy insects are very cooperative, sitting idly in the places we had put them earlier in the day. The moths live only two or three days, even in the wild. They do not feed, or even have functional mouthparts, living instead off the stored fat reserves they built up in the caterpillar stage. Females wait patiently for males to fly to them, attracting the opposite gender with a pheromone (like a perfume) that the males can follow from a mile or more away.

The males use their feathery antennae like satellite dishes, picking up the fragrant signals of a female and homing in on her. She may not even venture off of her cocoon, at least not in our captive setting where we usually take cocoon and moth out to the greenhouse and pin the cocoon perch to a tree trunk.

Longwing butterflies in the genus Heliconius are at the other end of the longevity spectrum. While most butterflies can last two or three weeks, maybe a month on flower nectar, longwings can go up to six months because they can also eat pollen. There is no end to the variability in color and pattern, even within one species of Heliconius. Some mimic milkweed butterflies that are toxic to some predators. All are neotropical in their distribution (that means they are native to Mexico, Central and South America). Colorful and seemingly fragile, they fly slowly, perching frequently. This Heliconius erato displays a typical pattern for its species.

Come evening, or during overcast days, the longwings seldom take flight, instead hanging from the underside of foliage, or perching on leaves like this Heliconius doris.

As diminutive as the longwings are, the swallowtails are large and powerful. This Magnificent Swallowtail, Papilio garamus, is the only specimen to emerge so far from the multiple chrysalids we have received in shipments. It ranges from central Mexico to Costa Rica. 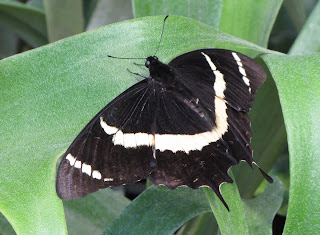 A real success from the shipments were sulphur butterflies in the genus Catopsilia. They are commonly known as “immigrants,” which of course has been the source of many bad jokes among the staff and volunteers in the exhibit. Ironically, the “Orange Immigrant,” Catopsilia scylla, hails from northern Australia and neighboring islands of Indonesia, not from south of the U.S. border. 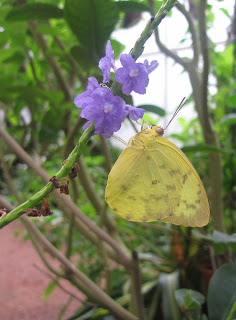 Wherever you call home, you might want to plan a trip to meet these wonderful insects while they are here in Tucson. Butterfly Magic runs through April 30, 2011, so reserve those tickets now.