This past weekend, March 12-13, 2011, I had the pleasure of participating in the third annual Tucson Festival of Books, “Where Words & Imagination Come to Life.” Held on the campus of the University of Arizona, it drew an estimated 100,000 people over the two days. 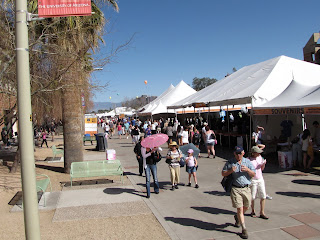 On Saturday afternoon I was part of a three-person panel, moderated by Justin Schmidt, discussing “Southwest Dangers: Things That Sting, Bite, Poison…and Kill.” Also on the panel was Amy Stewart, author of Wicked Plants, and the soon-to-be-released Wicked Bugs. Scott Calhoun, another resident Tucsonan and garden writer, rounded out our trio.

I was all prepared to hate Amy Stewart for treading on “my” turf with her Wicked Bugs book, but she is actually humble, friendly, and impossible to dislike. No pretense whatsoever, and that also applies to Scott. Once we were finished with the panel discussion and booksigning that followed, we got a head start on the author’s reception at a local bar. Later, we had dinner with Simmons Buntin, founder and editor of the online journal Terrain. I could not have asked for a better day, or better colleagues and companions.

I am not at all sure who decided I belong is this esteemed company, but the organizer of the panel, Jenn Berry of the Pima County Library, was very appreciative of all of us. I know I sure enjoyed the experience, and hope to do more of this kind of thing in the future. I do think I need at least one more book under my belt, though….

Being an audience member is good fun, too! These book festivals offer workshops on writing and publishing, discussions of current events, regional issues, sports, politics, religion, you name it. There was even a cooking demonstration tent at the Tucson Festival of Books, plus lots of exhibit booths by local authors, agencies, and media. C-SPAN brought their bus and broadcast much of the event. Then there is the food!

I highly recommend attending the book festival nearest you, or starting one in your own city.