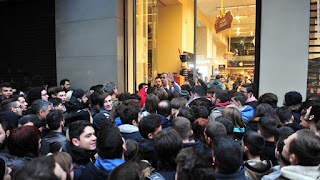 Wow, look at all those refugee....Oh, never mind, it's Black Friday
© CNN.com

It has been an eventful Thanksgiving week, but you might not be in the loop if you were properly focused on family, food, and travel. We can be grateful for our American privilege of indulgence in those loves and pursuits, but for how much longer? A government report acknowledging climate change, a scathing indictment of mindless consumerism by a journalist, and the virtual disappearance of the immigrant "caravan" should give us pause.

Released at 4 PM on Black Friday, when the masses were distracted by shopping, comes the Fourth National Climate Assessment, volume II, outlining what we can expect if we stay our present course in, well, pretty much our everyday habits as consumers, producers, drivers....Will the fourth report (time) be the charm, the one that finally elicits action? Don't hold your breath.

The first alarm bells began ringing around a 1965 report issued by President Lyndon Johnson's Science Advisory Committee, its findings echoed in a speech by Frank Ikard, then President of the American Petroleum Institute. Ikard's analysis was published in the journal Nature. Good luck accessing that government report from 1965, despite it being public record. Attempts by Texas Pollinator Powwow, a Facebook group, to provide links in its posts have resulted in not one, but five broken links. Cover-up, much?

The hyperlink above goes on to reveal that physicists and other scientists had their suspicions, and were conducting atmospheric research, back in the mid-1950s to create projections of rising carbon dioxide levels and the implications thereof.

Appropriately for "Black Friday," journalist George Monbiot dropped a bomb of an editorial on what he calls "Pathological Consumerism", condemning the largely American habit of gift-giving for the sake of gift-giving, with little or no thought to the greater ramifications. He argues convincingly that production of many products, including novelty items, consumes so many resources, and takes so much energy, that it is nearly equal to the impact of driving internal combustion engine vehicles in terms of contributing to climate change. Plastics are derived largely from petroleum, electronics depend on the mining of rare metals, etc, etc.

Ok, fine, but what about that parade of immigrants threatening our southern border? Largely dismissed as a political stunt for the midterm election cycle, the deployment of troops to the Lower Rio Grande Valley in Texas seems to have evaporated in its urgency. There are larger than average numbers of asylum-seekers at the California border checkpoints, we are told, but that does not seem to have triggered any alarm or military response.

Here is something to consider: if you think "normal" streams of immigrants are an issue, just wait until catastrophic climate change kicks in. As more of the planet becomes uninhabitable, where do you think those displaced people are going to go? You want to do something about the immigration problem? Then do something to mitigate climate change. Call on our government officials to mandate industry controls, but also think twice about your daily habits, including whether you really need to drive to the store, or if it can wait until you have a greater necessity, or can find a carpool buddy.

I call on my followers to set an example of responsible consumerism, activism, and compassion for all species. No, we are not going to be perfect, and we have to learn to forgive ourselves for that and not let it prevent us from acting anyway. We have to be stern to those in power, and gentle to those struggling to change for the better. We can do this, but we have to start now, no pessimism allowed.