A Different Kind of Impulse Buy 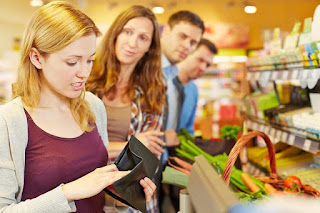 I share the following experience not to boast, but as a conversation-starter, a place to begin thinking about how we can heal our isolation, and maybe upend our assumptions and fears, and start overcoming our guilt. Actions do speak louder than words, and risks do have their rewards.

The other night my wife and I were in a grocery check-out line behind an older woman in one of those motorized carts. I watched from a respective distance as she unloaded mostly processed foods. After the clerk gave the total, the woman began subtracting items to get herself within budget. The first to go was a bag of oranges. The second was a bag of vegetables for stew. That did the trick, she could pay now.

I turned to my wife and mentioned that I thought the lady had sacrificed the two most nutritious things in her cart. This had me concerned if only because the woman might not be in great health already, and giving up fresh fruits and vegetables would not help matters. I felt myself getting increasingly anxious and fidgety. I asked my wife if she would agree to let me buy the two items for the woman. She nodded. I spoke up quickly before the stranger concluded her transaction and rode off into the....well, the sun had already set, actually.

Naturally, the woman was grateful, I have yet to meet any random individual in a scenario like this who is an ass about it. What surprised me was myself, how I had reacted quickly, without sizing up anything more than the fact that this lady might be in ill health, possibly on a fixed income, was older than myself ("respect your elders" was playing in my ears), and Caucasian. End of story, and the fact that she was White was a mere observation. My assumptions, if I had any, were all giving her the benefit of the doubt.

Reflecting on this, I ask myself under what circumstances might I have not intervened in a positive manner? How about a single mother paying with food stamps who is unable to get the items being taken off the conveyor because they are not WIC or SWIPE approved? Well, don't we all deserve some comfort food now and then, or a minor indulgence in something extravagant? I think so. I do it myself.

I know one person who volunteers in the food pantry at my wife's church who, sadly, judges everyone who walks through the door. This person complains to us about how she sees people coming in for food who have a smart phone, tattoos, nails done up by a salon, and other visible attributes that suggest they are spending their money frivolously. Wow, a few assumptions there, don't you think? How do we know they did not get the tattoos and phone before they fell on hard times? So what if they have nice nails? You get your hair done, don't you, we ask our friend?

This is how bigotry starts, with stereotypes and assumptions, and a superiority complex thrown in for good measure. We have no idea of the backstory for a given individual and, what is even worse, we have no desire to hear it. God forbid that we learn our judgments are unfounded. We would probably end up calling that person an "exception" anyway. Sigh.

What if the person ahead of you at the checkout was a young man of "minority" ethnicity, with face tattoos that make him look like the next mug shot you will see on the news? Seriously, you should see what the average Colorado criminal looks like. Ok, maybe not, but on the other hand, what if helping him out keeps him from a B&E to get that item later? The blessing and the curse is that you never know the consequences of your actions. They might be insignificant or even have zero impact, or they might change everything. So, you do it anyway. You may ask yourself whether you will regret it, but if you are in a situation where you can help someone, you will very seldom be sorry you did so. Not acting on your better impulses is something you are almost guaranteed to regret.

Psst, how about some overweight dude in overalls with a red "Make America Great Again" ballcap? Ok, now you have gone over the line. It's every man for himself! Insert wink emoji here.