Art is What You Make (of it)

What do a banana taped to a wall and snowshoe tracks in a mountain landscape have in common? Both qualify as art, or not, depending on your point of view. Debating the definition of art is a useful and important exercise, if only within our own individual minds. It informs our personal and collective aesthetic, and our morality. 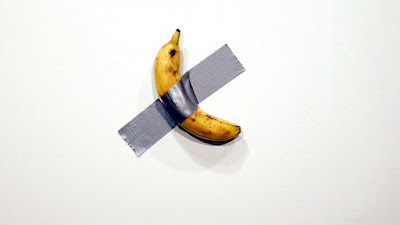 The wall-mounted banana by Italian artist Maurizio Cattelan might have made the news just for the $120,000 price tag it commanded, but the ingestion of the piece is what got the attention of the media. Evidently, the man who tore the duct tape off and consumed the fruit, David Datuna, is himself a performance artist who claimed that his act of eating it was itself a form of art. Here, it would appear that art is a matter of convenience, publicity, and questionable ethics. Is art for the sake of fame and/or notoriety really art?

Meanwhile, in mountain landscapes around the globe, Simon Beck creates stunning, large scale patterns by tromping across the snow in snowshoes. He gains inspiration at least in part from the intricate designs of snowflakes themselves. He will be coming here to Colorado in January to no doubt make something magnificent. Beck has also done similar work in sandscapes.

The personal choices of the artist, and the range of interpretations among the audience, make art the most universal expression of freedom that there is.

Both the banana and the snow tracks are ephemeral. Fruit spoils, tracks are quickly obliterated. One thread I read in social media asserted that Beck’s work was not art because it “has no meaning.” I found myself boiling at that remark, but was not sure why. I started writing….

”Wow. One could ask what is the meaning of a sandcastle, a snowman, an ice sculpture, a decorated cake, or any other ephemeral piece of art. If anything, I think this is astonishing precisely BECAUSE of the labor involved knowing the results could be gone in the next hour. The message? Appreciate the NOW, that is all we have."

This goes to the root of what makes art such a volatile subject. Art is whatever you make of it, but the intent of the artist is key. Art can be used as a weapon, as a way to empower or a way to oppress. Art can be propaganda or it can be a tool of social change for the better. Art can be whimsical or profound, humorous or gut-wrenching. The audience decides whether to elevate works to an iconic level or deem them worthy of the trash bin, but there will always be dissenting voices. The personal choices of the artist, and the range of interpretations among the audience, make art the most universal expression of freedom that there is.

It may be telling that I am personally much more likely to hold contempt for those offering derogatory opinions and comments about a given work than I am for artists who I still may not celebrate as genius or buffoon. You have the right to create something and call it art, but then again you do have the right to your point of view as an onlooker. What sparked your outburst of praise or condemnation, though? That is what I want to know. You were moved, but why? Honest conversation should be valued more than it is, and is itself a form of artistry we should all aspire to.

I was living in Cincinnati at the time that Robert Mapplethorpe’s posthumous “The Perfect Moment” came to the Contemporary Arts Center in 1990. Controversy surrounded the sexual and homosexual images in the exhibit, and protests and a trial ensued. I felt it was my civic duty to patronize the exhibit, regardless of whether I agreed with all aspects of it. Yes, there were photographs that made me uncomfortable, but many more that made me laugh, or simply gawk at the jaw-dropping beauty of orchids and the human figure. Besides, exposing yourself to discomfort is underrated. It tends to cultivate empathy. There is no doubt in my mind that Mapplethorpe fully embraced, and celebrated, everything that makes us human, from an appreciation of the natural world to our sexual proclivities. There was zero malice to be found in his intent.

What is your own threshold for “art?” Does it hinge on the degree of effort exercised in executing the piece? What about the degree of effort you put into making your interpretation? Do you scoff and move on? How do you express your appreciation? Is it by assigning an arbitrary monetary value to it at auction? Do you leave flattering comments in the guest book at the gallery? There is an art to evaluating art, wouldn’t you say?