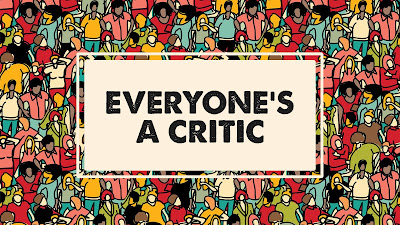 ”Everyone’s a critic,” the saying goes. This is perhaps truer now than it has ever been, and the intensity of criticism, and reaction to it, is at fever pitch. Why is this so? Why is criticism so argumentative? Do we even know what criticism is anymore?

To be clear, the criticism addressed here is not the same thing as what a movie, theatre, or restaurant critic does for a living. That kind of criticism is more a matter of shared personal taste and opinion, and perhaps public service. In the case of eating establishments, the health department is the only critic that really matters. A bad-tasting burger is one thing, a case of botulism is quite another. Matters of accreditation are likewise much more institutionalized and standardized, as they should be in the interest of accuracy and safety.

It is quite apparent that criticism in the traditional, personal sense suffers from confusion with disrespect, jealousy, betrayal, political correctness, and a whole host of other negative associations. Indeed, the interpretation of criticism by the receiver, and the intent of criticism on behalf of the critic, are often wildly different. This is a profound failure of communication because the conversation ends with unexpressed resentment, hostility, defeatism, and other emotions, plus assumptions about the character of each individual that may or may not have validity. There is seldom clarification of intent, let alone reassuring words that you are not out to assassinate someone’s character.

This is not to say that criticism is never generated from ego, or an attempt to assert power by demeaning others, subordinate or not in the formal sense of a professional hierarchy. Criticism is frequently viewed as a tool of persuasion. It is assumed to have an agenda behind it. Maybe it is a desire to invalidate a belief system, or discredit a competing hypothesis, or, worst of all, diminish someone’s self-worth and realm of experience to further an established but destructive political, social, or judicial system.

It is this last scenario, the one revolving around white privilege and patriarchal societies, criticism must be leveled and respected as a means of advancing reforms in equality, social and environmental justice, and leadership. We must speak honestly and fearlessly, and sometimes fiercely.

If you come from a place of white privilege and are compelled to start acting to advance the rights of others less fortunate, you must be prepared to accept criticism for every word and every thought you express. A baby does not come running out of the womb. It crawls and walks first. Your initial efforts at empathy and action are going to be laughably awkward. You may need to lower your expectations of yourself, and do more listening in the meantime. There is no shortage of women, BIPOC, and LGBTQ+ leaders to follow and learn from.

Many of us have a visceral reaction to criticism because it triggers negative emotions from our childhood. These are the “buttons” that your parents and teachers and peers pushed. They bypass the logical intersections of your brain like a car running a red light. Conclusions are jumped to that no longer serve your interests and it takes extreme conscious effort to put the brakes on, stop, and think again. It is worth the work, but you once again have to accept that you won’t get it right every time. It takes years, even decades, to get rewired, realigned.

Criticism, at its most brilliant and loving, is delivered with the intent to make you a better person, not turn you into someone different from who you are already. The best critics are people who make this clear from the outset and don’t leave you to wonder. When offered from a perspective of empathy, criticism is a powerful tool for change. Recognition of human insecurity, of imposter syndrome, and ego fragility is necessary in communicating criticism effectively and honestly. The goal should be to elevate the other person in their perspective, knowledge, understanding, skills, talents, and other personal attributes.

The worst criticism comes from a place of self-defense, desperation, dominance, aggression, disrespect, or dismissiveness. This serves no one, including the critic. It is not even criticism at its most extreme, it is violence. If you are so obsessed with preserving your own opinion, perspective, or insulated position of power, you probably need to be more self-critical instead of putting others down.

We come to every place, physical, intellectual, and emotional, with expectations and fears, promise and pessimism. This is human nature. We are gifted with the ability to overcome the inertia of protectionism by the plasticity of our minds, but we are unfortunately too often inflexible in that regard. Let your guard down, a little at least. Bend your ego. The more you do, the less the pain. I promise.