Last week I learned that my first true mentor, Jim Anderson, passed away on September 22, 2022 at the age of 94. It was my intention to honor him while he was still among the living, but I did not make that enough of a priority. That oversight in no way reflects what a powerful and positive influence he was on my life, and the lives of so many others. 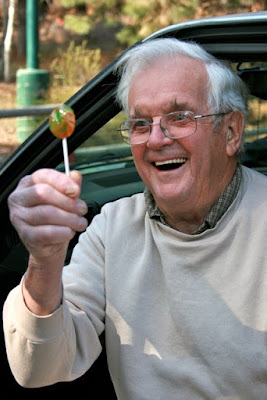 I am reasonably certain that my mother was the one who took the initiative in connecting me to Jim. She was a veteran in the television and radio industry, and at the time I first met Jim he was doing a local show on nature for Oregon Public Broadcasting. I seem to recall that our initial meeting was in his studio, in fact.

Concurrently, Jim was employed as an educator with the Oregon Museum of Science and Industry (OMSI). From there, he became director of the Children’s Zoo and conservation and education programs at what was then the Portland Zoo (now the Oregon Zoo in Washington Park).

Jim introduced me to other biologists and naturalists, too, including Mike Houck, who went on to become the Urban Naturalist for the Audubon Society of Portland. Jim and Mike did programs at OMSI field stations and camps, which I had the privilege of visiting periodically on weekends.

The Nature Conservancy hired Jim to manage its Ramsey Canyon Preserve in the Huachuca Mountains of southeast Arizona for three years, but Jim and his wife Sue returned to his beloved Oregon to run the nature center at Sunriver resort south of Bend in the early 1970s. It was there that I caught up with him again. Had my late mother not been so overprotective, I might have spent time with him exploring lava tube caves, or maybe even assisting in banding raptors.

Myself and Jim at Sunriver in August, 1971

Eagles, hawks, and owls were always the center of Jim’s wild universe. He even flew with them, in a manner of speaking. He got a commercial pilot license, and was an accomplished pilot of glider planes. He even instructed student glider pilots.

Among Jim’s enduring menagerie of animals was “Owl,” a Great Horned Owl that had lost an eye. Remarkably, the bird regenerated the eye and, after several years of behavioral rehabilitation, Jim released “Owl” with great fanfare at Sunriver. Owl was immediately harassed by an American Kestrel, such is the drama of nature.

Jim surveyed and banded birds of prey in central Oregon for over fifty years, the last decade or so with the company of his wife, Sue. She wisely insisted that climbing cliffs and trees was too dangerous for someone in his eighties, and Jim begrudgingly retired.

One of the milestones I am most proud of is when I was first published in Ranger Rick magazine, because I had grown up reading Jim’s articles in that publication. He wrote consistently, for many periodicals, and had a column in The Nugget Newspaper of Sisters, Oregon. He also appeared regularly in The Source Weekly of nearby Bend, Oregon. Jim was an outstanding photographer, too, and most of his articles included his images. He compiled his most memorable and hilarious stories in Tales from a Northwest Naturalist, published in 1992. 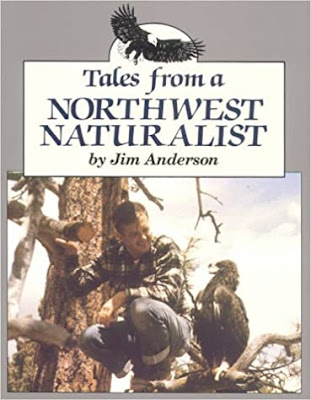 Everything came full circle for me when Jim agreed to be best man at my wedding to Heidi, on April 29, 2012. A few years later we saw Jim for the last time at his home in Sisters. I had the privilege of introducing another young man, and his then girlfriend (now marital partner), at that time. The couple lived in Bend, and I hope they were able to visit with Jim and Sue again before Jim and Sue moved to Eugene, Oregon to be closer to their children. 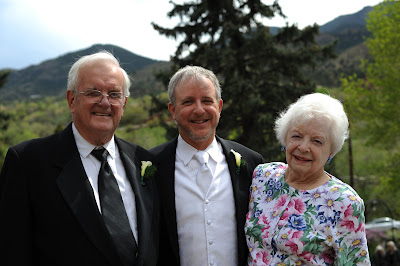 Jim, myself, and my mother at my wedding

Being an only child, I had a difficult time socializing with my peers. It was with adults that I felt most comfortable, but Jim nudged me to expand the boundaries of my comfort zone. He was always patient and encouraging, but also insistent, especially when it came to my education. I am glad I still have a few years left, hopefully, to become an even better human being, and a less hesitant one when opportunities present themselves. Jim's photo of Heidi and I

From what I hear from Sue, I am one of many disciples of Jim. His enthusiasm was contagious, his breadth of knowledge and interests seemingly boundless (did I mention he sang in church choirs?), and his self-reliance admirable. There was no machine he could not repair with bailing wire. He had an old-fashioned wit and sense of humor, and a genuine love and appreciation for all of those he invested his time and counsel in. They do not make men like him very often nowadays. Rest in peace, Jim, you deserve eternal joy and love.