I am quite certain that I like bats more than the average person. Still, there are some places I would rather not encounter them. Like inside my house. That is exactly where I found one flitting about in South Deerfield on Tuesday night, August fourth.

It was around eleven PM and I decided I would go out and see if I could find any insects around the lights in town. I opened the door to exit my room to be greeted by an airborne blur and the breeze and sound of wingbeats. I recognized the animal immediately, if only because the next door neighbor had a bat in her own home the week before and the situation was still fresh in my mind.

The bat was doing the flying equivalent of pacing up and down the dark hallway, looping through the kitchen at the other end, and coming back toward my room. Naturally, my first thought was to get my camera and see if I could take some pictures. I chose the kitchen as my vantage point, and got many, many fine shots of the empty room along with three appropriately ghostly images of the bat zipping by the fridge. 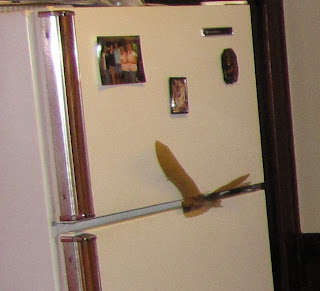 At times it seemed the bat had left the area entirely, but it turns out it was still making the rounds, just skimming two to three inches off the floor on occasion. I was incredibly impressed by the aerial skills of this little insectivore. Ok, it really wasn’t that little. Surprisingly large in fact, so I surmised it was probably a “big brown bat,” Eptesicus fuscus, perhaps the most common and widespread species in North America.

Once I had my fill of photography frustration, I simply opened the kitchen door and away it went, presumably to hunt moths and beetles, just like me. It turns out I did exactly the right thing when confronted with a bat in one’s residence. In the weekly e-mail newsletter from the Athol Bird and Nature Club came this tidbit from Mass Wildlife:

BATS IN THE BELFRY
“With summer's hot, humid weather finally here, some Bay State homeowners may discover bats residing in their homes! Attics are the most common portion of a house in which bats roost and raise their young. After a few hot summer days, an attic may become too warm for the bats, forcing them out and sometimes into people's living quarters as they search for cooler places to roost. What's a homeowner to do? Fortunately, a single bat flying in a room can usually be dealt with quite easily. Open an outside window or door in the room containing the bat and close off the rest of the room from the house. It's usually only a matter of a few minutes of circling before the bat locates the open window and leaves the house. Bats do not attack people or fly into people's hair.
If a bat has landed, it can be assisted out of a house in several ways. For a bat on a curtain, place a jar, coffee can or small box over the bat, carefully working the animal into the container, and cover it. A bat on the floor can be covered with a towel. Another method is to put on leather gloves and simply pick up the bat and release it outdoors --don't use cotton gloves or handle a bat with bare hands. Whatever method is used, don't worry when the bat squeaks loudly when handled. Take the bat outdoors and release it. If anyone has had direct contact with a bat or if a bat is found in a room with a sleeping person, the bat should be safely captured but not released. Contact local health officials for assistance in evaluating potential rabies risk and submitting the bat to the Department of Public Health for rabies testing.
Little Brown Bats and Big Brown Bats are the most likely species to be found in buildings. In some cases, with small numbers of bats, people don't mind their presence and concentrate on blocking holes and cracks leading into the human living quarters. Where there is a large colony in house walls, biologists recommend that homeowners wait to initiate eviction proceedings until the first week of August through November. Waiting to evict the colony allows time for young bats to mature and leave the house on their own.
Because Massachusetts and other northeastern states are experiencing a sudden and unexpected decline of bat populations due to a white powdery fungus on bat faces called White Nose Syndrome, the Division of Fisheries and Wildlife (MassWildlife) reminds all property owners with a summer colony of ten or more bats to report report the colony's location, type of structure where the bats reside, and how many bats are in the colony, by calling….”

This is good information. You can learn even more about bats, and what you can do to help foster a better understanding of these maligned creatures, at Bat Conservation International, the world’s leading organization devoted to bat welfare.