The commentary on the shooting spree in Tucson earlier this month has naturally led to a debate about stricter gun control. My personal opinion is that I am far more afraid of some members of my own species than I am any of the venomous, predatory creatures I may encounter on a hike in an Arizona canyon, or on an African safari. That is not even counting weaponry that makes the exercise of lethal force even more possible for Homo sapiens. I think we need to remember that we are animals ourselves, but that we also have the capacity for foresight, personal responsibility, self-control, and honest communication.

I don’t see the abolishment of personal firearms coming any time soon, but I am also not understanding why people are so up in arms about the Second Amendment at this point in our nation’s history. We already have well-armed militias, they just happen to be mostly racist survivalists. Don’t you feel safer now?

Why do we feel the need to obtain a gun on a moment’s notice? We want a waiting period before a woman undergoes an abortion, but you should be able to get a gun instantaneously? Forgive me, but this is the scenario I see playing out too often:

Gun Shop Owner: “Ok, I see from the background check you haven’t committed any crimes…”
Customer (to himself): “No, this will be my first offense.”

We cannot assume that lack of a prior crime means the person is not preparing to commit one, be it suicide, homicide, or some other act of violence. Purchasing a weapon can be a highly impulsive action, and it should not be accommodated so readily when the consequences could literally be so grave.

Psychiatric evaluation should be mandatory for anyone wanting to purchase a firearm. The more time allowed for intervention, anger management, and prescribed medication, the better. Stress, real or imagined, is arguably at an all-time high, and the answer is not putting guns in the hands of the angry and frustrated.

But if everyone was able to defend themselves (with a gun), then crimes like the Tucson shooting would not take such a heavy toll. Someone would have shot the bad guy already. Sure, but a citizen “hero” could just as easily kill another innocent bystander. We have a trained constabulary to kill innocent Black people….I mean….apprehend criminals. Sorry, I spent eleven years in Cincinnati…. 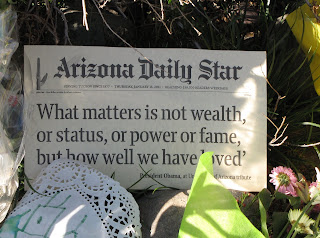 Further, the overwhelming impression I get from gun advocates is that they want guns to allow them to protect the rest of their “stuff.” You won’t hear that argument from the gun lobby, though, because it sounds too selfish. Well, we are selfish, for crying out loud. Every animal is selfish, we just go to great lengths to disguise our selfishness. This dishonesty, I believe, is at the root of most social issues in the world today. We want our way, but can’t bring ourselves to say so in the most honest, straightforward manner.

Do you remember the Y2K scare? It was going to be a manmade disaster with all the computers crashing and causing total chaos. Even some people I truly admire were talking about stocking up and arming themselves “just in case.” Why? We don’t react that way to a natural disaster like a tornado, hurricane, or earthquake. Heck, we put down our guns, and pick up shovels and sandbags instead. What is the difference? You lose “stuff” in any kind of catastrophe!

The bottom line as I see it is that we need mostly to admit our selfishness. I want fewer guns because I’m sick of good people getting murdered and maimed, and I really don’t see an upside to more weapons. I am also seeing less merit in the accumulation of material wealth all the time. We need to share more, possess less. Above all we need to re-establish trust in one another. Where do you stand? Please comment. The only thing I ask is that you be honest.