Aquarium of the Pacific

One of the many places I visited in southern California last month was the Aquarium of the Pacific in Long Beach. I was accompanied by Kim Moore who is a volunteer at this impressive facility. The aquarium is only thirteen years old (as of this June 20, 2011), and they just opened a new exhibit, “Arctic & Antarctic: Our Polar Regions in Peril.” 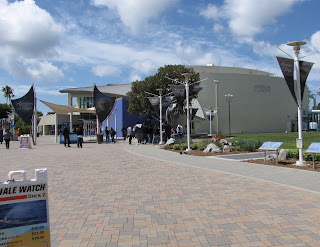 Located in the Long Beach Shoreline Rainbow Harbor Marina, the aquarium is flanked by restaurants and tour boats, with the Lions Lighthouse for Sight just around the corner (left of the above image). Kim and I took one of the harbor tours to break up the visit to the aquarium. 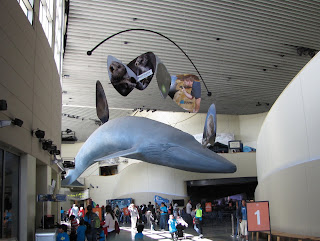 The first thing you encounter upon entering the aquarium is a life-size model of a female blue whale and her calf (hidden in this image), suspended from the ceiling. The adult fiberglass facsimile is “only” eighty-eight feet long, which it turns out is about average for the current population of this species. He name is “Edie,” and her male calf is “Edison.” The accuracy of these models is impressive, and one gets to truly appreciate the streamlined bodies of these leviathans. 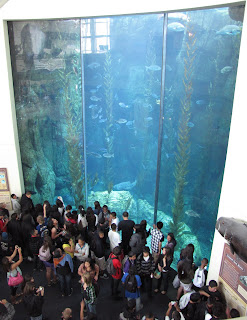 Beyond the whale is a two-story window on a tank called the “Blue Cavern,” in the Great Hall of the Pacific. This tall exhibit is an excellent introduction to the kelp forest habitats common along the southern California coast. In this case, the inspiration was Blue Cavern Point along the northeast edge of Santa Catalina Island. Among the denizens of the exhibit are some impressive California moray eels, Gymnothorax mordax. 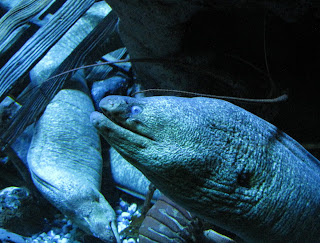 Adjacent to the Blue Cavern is the Amber Forest and other “galleries” depicting the marine life of southern California and the Baja peninsula. One small aquarium features a captivating colony of Garden Eels (Heteroconger sp.). 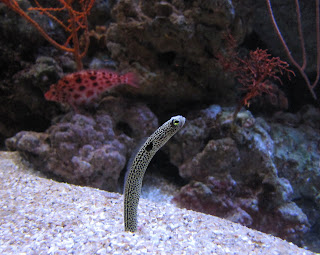 The indoor portion is just one facet of the whole complex. The aquarium also boasts outdoor exhibits that include shark and ray touch tanks where visitors can gently stroke harmless cartilaginous fishes like Bamboo Sharks and Bat Rays. Visible from both above the water and below are Sea Otters and California Sea Lions.

Yet another outdoor exhibit is the Lorikeet Forest, a 3,200 square foot aviary where visitors can feed these stunning birds. Five of the 32 subspecies of the Rainbow Lorikeet are on exhibit. 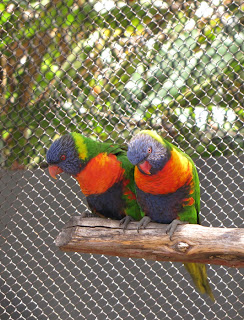 Native to Australia, New Zealand, and islands in the South Pacific, lories are under pressure from the black market pet trade and from farmers who view the birds as pests in fruit orchards.

Back indoors, the Tropical Pacific Gallery features fish and invertebrates from faraway places. A Northern Pacific Gallery holds animals (including birds like puffins and auklets) from the cold waters of British Columbia and Japan.

It is impossible to communicate in one blog entry all of the exhibits and entertainment opportunities afforded by the Aquarium of the Pacific. It is not a cheap attraction (admission is $24.95 for adults, $21.95 for seniors age 62 and over, and $12.95 for children 3-11), but well worth the price. You should plan on spending the whole day watching the birds, mammals, invertebrates and fish. Don’t be surprised if some of them watch you in return. 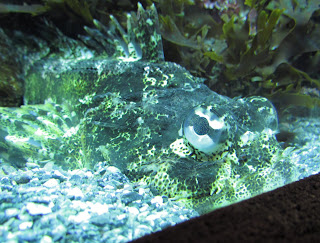