One of the points of interest that I visited in southern California last month was the Point Vincente Interpretive Center in the City of Rancho Palos Verdes. This building, originally opened in 1984, was expanded and re-opened in 2006. While the focus of the center is the migration of the Pacific Gray Whale, there is much more to the facility. 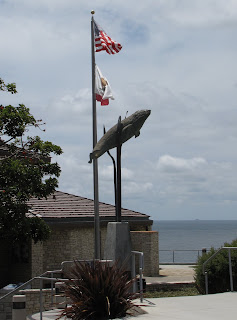 It is surprising and pleasing to see that the majority of interpretive centers in southern California are city parks, rather than county, state, or privately-run. I think it improves civic pride and helps bond residents when they have a real public attraction to take ownership of. Like many of the centers in the Greater Los Angeles area, this one has art and landscaping around the exterior that creates an aesthetically-pleasing first impression. 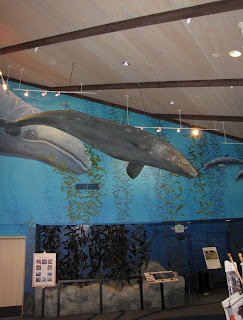 Once inside, the first thing one sees is a open habitat diorama of the Palos Verdes Peninsula, and a fiberglass model of a Pacific Gray Whale suspended from the ceiling. A gift shop is on your immediate right, beyond which is the front desk, manned by both staff and volunteers. On our visit we were greeted by a volunteer anxious to explain the unique geology of the peninsula. This point of land is a tectonic fault block that has risen from the sea floor within the last two million years. That is quite recent by geologic standards. It was actually uplifted twice, with pronounced erosion in the interim, and obvious erosion visible today. Continual landslides make traversing the peninsula, even by vehicle, a bit dicey. 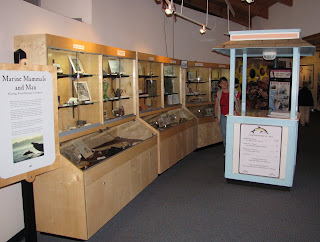 A good portion of the exhibit space in the center is devoted to man’s relationship to marine mammals, and whales in particular. Many historical artifacts related to whaling are on display, but equal time is given to the evolution of public opinion regarding cetaceans, and how research on these leviathans has progressed. It is quite an impressive collection considering how local the facility is.

Another surprise was the exhibit on the previous tenant of this piece of real estate. Remember Marineland of the Pacific? I recall it from my childhood. Many of my friends in elementary school made it down to that aquarium/theme park, though I never did. I had always thought that Marineland became Sea World, and indeed the owners of Sea World purchased Marineland in 1987, shutting it down shortly thereafter. The orcas, porpoises, and other animal performers were relocated to the San Diego park. The oceanarium known as Marineland had a good run, though, having opened in 1954. 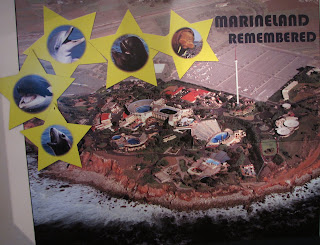 Back outside, the gardens surrounding the nature center along the edge of the bluff attract a variety of insect and bird life. The behavior of wind and air currents along the bluff also means this is a premiere spot for watching soaring seabirds, especially Brown Pelicans. The odd Red-tailed Hawk may join them, spiraling on the thermals that seem to originate there. 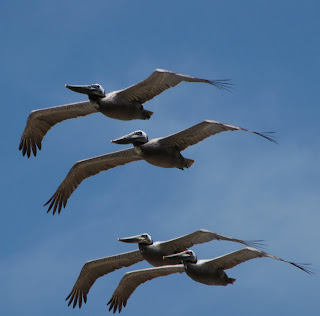 I highly recommend a visit to this landmark the next time you find yourself in the vicinity of Los Angeles. Remember that the Pacific Gray Whale migration usually occurs from December through April. The bluff offers a spectacular view of the ocean below, the kelp forests waving in the crests and troughs of the tides. Whales would be easily visible, too.