It was not without a great deal of deliberation that I decided to write this and make it public. Personal struggles with faith, consciousness, and current affairs are always a bit of a risk when one dares to dislose them. The potential pending extinction of the Earth’s remaining rhinoceros species has finally given me the sense of urgency and will to confront the conflict I have between religion and Creation. 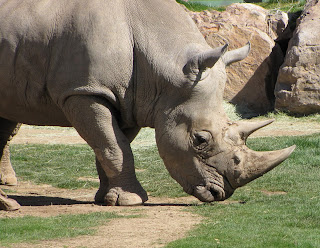 Let me say first that I have faith in God. I would also like to believe that I respect the beliefs of others, be they Baptists, Hindus, or Muslims. I personally know individuals of many faiths, and relate well to them. We learn from each other and sometimes challenge each other’s tenets. What I often have a problem with is the church in the institutional sense. The church holds great power, and does great things for humanity at a community level. National campaigns in the political arena are often effective, and missions to impoverished foreign lands bring relief to untold thousands. Where the power of the church is conspicuously absent is in advocacy for protecting the remainder of Creation.

Rhinos are facing the kind of violent assault usually reserved for wars of human genocide. Indeed, that is what species extinction amounts to: zoological genocide. The carnage even threatens those individual animals at zoos. What do people have against rhinos? They covet the rhino’s horn.

In the Middle East country of Yemen, rhino horn was polished and fashioned into ceremonial dagger handles. These curved knives, called “jambiya,” are presented to pre-teen boys as symbols of impending manhood and devotion to the Muslim religion. The use of rhino horn in daggers has been outlawed since the 1980s, and the black market there has largely dried up. It is the long-held belief of Asian cultures that rhino horn has medicinal properties that is at the root of the current spike in rhino poaching.

Rhino horn allegedly relieves everything from pain, fever, acne, laryngitis, and anxiety to rectal bleeding, rheumatism, gout, food poisoning, headaches, and boils. It is also thought to cure “devil possession,” smallpox, typhoid, and snakebite. Recently, rumors that a Vietnamese government official used rhino horn to cure his cancer sent demand, and prices, for horn through the roof. A horn can now fetch $33 to $133 per gram. This is close to double the price of gold, and sometimes exceeds the value of cocaine.

This utilitarian view of wildlife is nothing new of course. The problem is that with endangered species it is an unsustainable enterprise. The only sustainable value of wild animals is probably ecotourism. Without rhinos in Africa, ecotourism takes a hit and things slip back into valuing all wildlife as a dead product.

Scientists and game reserve managers are doing their best to defend their own rhino populations from poaching pressures, but it is not enough. Zookeepers engage in an annual event called “Bowling for Rhinos,” in an effort to raise much-needed funds for continued conservation. The Christian church….

Ah, yes, where is the church? Busy saving human souls, no doubt. Maybe they are ministering to incarcerated poachers. What we don’t see are prayer circles for rhinos. We don’t see ecological sustainability as a leading goal in missionary work. Why not?

I know plenty of individuals, including my own fiancée, who are religious and ardent supporters of wildlife conservation. It is the institution of the church that is not. I suspect that much more effort goes into trying to defeat the teaching of evolution in schools. Perhaps that is the real problem. No good Christian institution could possibly work in concert with a scientific community that believes in evolution.

Personally, I don’t care which philosophy one subscribes to: Genesis or Darwin. What both sides can say with certainty is that we are losing pieces of the Creation rapidly, due to humanity’s continued negative impact in this Garden of Eden. We can no longer afford the luxury of continuing to argue about how every species came to exist.

According to the Bible, we are supposed to be stewards of this Earth while we are here, not hell-bent on attaining immortality once we make our final exit. We will get our just reward if we are just in our care of the Creation. Scientists and theologians can complement each other instead of excoriating one another.

What about you? What can you do? Yes, you can support conservation efforts with your monetary contributions, but times are tough for folks financially. How about this: When you count your blessings, count rhinos, tigers, elephants, whales, and all other wild creatures among those gifts. Looking for something to pray for? Bless the beasts and the children, for don’t we want our sons and daughters to be equally blessed with wild animals? 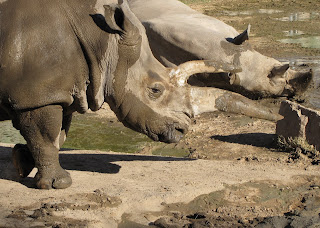