February twenty-ninth comes around only once every four years, so we should probably make the most of the “extra” day. As luck would have it, the weather was just gorgeous here in Colorado Springs. The high for the day was 58° F, with occasional light breezes. I decided to explore one of the urban trails and was glad I did. 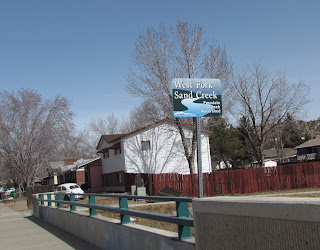 Murray Boulevard runs north and south in front of my apartment complex, and I can walk south for about a mile when it intersects the Homestead Trail paralleling the west fork of Sand Creek. Sand Creek is dry most of the year, and much of it is channelized, but wildlife seems to like it anyway. One of the first birds I saw when I set foot on the trail was a new one for me: a Townsend’s Solitaire. I thought it was some kind of flycatcher, but Jeffrey Gordon, President of the American Birding Association, was kind enough to correct me from the image (below) I e-mailed to him. 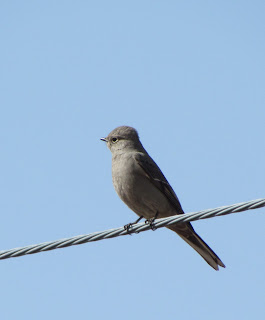 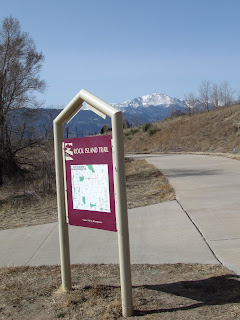 Most of the trails in the city are paved, in order to better accommodate bicycles, runners, and the handicapped. Many people also use the broad paths to walk their dogs. Where trails intersect streets, there are usually underpasses for pedestrians so that one does not have to cross traffic. The traffic signals also tend to be unusually long, so the underpasses help you maintain your pace and momentum. 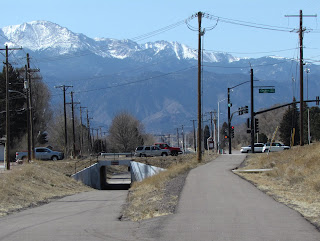 The warm weather made for some surprising entomological encounters. I stopped to photograph a plant, and heard the unmistakable sound of a grasshopper making a crepitation flight. Certain adult grasshoppers can generate in-flight noise at will. The sound has a crackling quality and is easily audible, sometimes downright loud. It took me awhile, but I finally tracked down one of these insects. It turned out to be the Speckle-winged Rangeland Grasshopper, Arphia conspersa. Here are a pair of males: 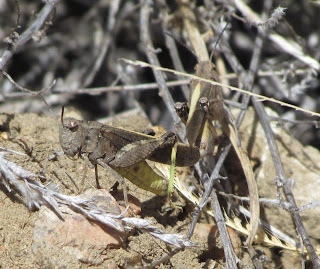 Back in November I had seen nymphs of this species. I wasn’t expecting to see adults until April or so. Maybe this mild winter has accelerated their metamorphosis. I also was shocked to see adult Podalonia wasps out looking for cutworm caterpillars already. One was digging a burrow, which means she had already secured her prey and stashed it somewhere.

Beetles, too, were out and about. A Eusattus darkling beetle was scrounging for detritus, while nearby a tiny ground beetle (Carabidae family) was struggling to negotiate the shifting, sandy soil to get out of my footprint. 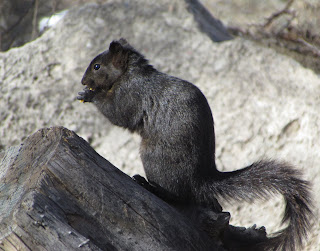 The Shooks Run Trail travels south, and meanders through the “Old North End” of Colorado Springs. This is an eclectic mix of old homes, new homes, and periodic commercial enterprises. Imagine my surprise at coming upon an antiquarian bookstore, right off the trail! I was delighted to find Doug Clausen, the proprietor of Clausen Books, to be friendly, informative, and, most importantly, negotiable. I left with a collection of small entomology books for a pittance. I’ll be back. 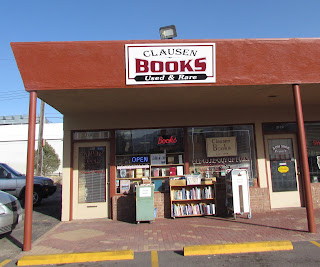 Farther down the trail I happened upon Dog Tooth Coffee. How sweet is that? A bookstore and a coffee house? Heaven. I left Dog Tooth with a mocha “Snow Dog,” one of those blended ice drinks with lots of calories. 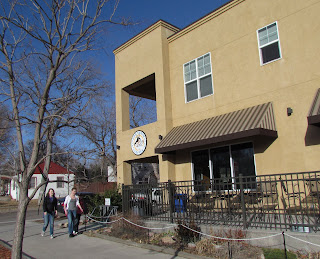 Just behind the coffee house was a cohousing community called Casa Verde Commons. This unique, tiny neighborhood features a wonderful community garden, among other sustainable attributes. I am pleased to see that Colorado Springs has such innovative social enterprises. 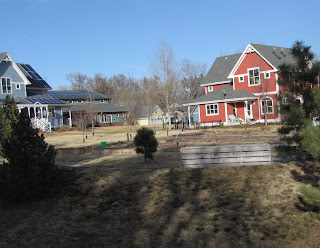 Next week the weather is supposed to be even warmer, so I will have to find other trails to follow; or go back down these. Here’s to you finding your own paths of discovery in the coming weeks and months.