Two Cars, but at What Cost? 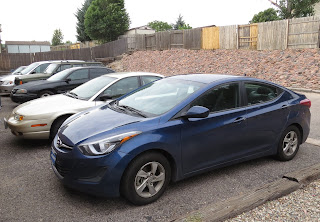 We had occasion to take our 2002 Saturn in for a check-up last month, and the upshot was that it became clear we needed a newer, safer, more reliable vehicle for my wife to get to and from work, at least by winter when the roads get icier and diceier. The process of purchasing that second car left me feeling both relieved and anxious in ways I was not accustomed.

Heidi, my spouse, became uneasy when the dashboard on the Saturn lit up with a red "ABS" warning. Wow. I had no idea that automobiles even had abs, let alone that they were that important. Apparently, the car had not been doing crunches or sit-ups for awhile. Ok, so we learned that "ABS" stands for "Anti-lock Braking System," and that is a pretty integral part to driving safely. Unfortunately, the Saturn is no longer in production, and neither are many parts for those models still on the road. That includes the ABS. So, we are left with a vehicle that functions incompletely, and hence the need for a newer car.

Heidi really does her homework when it comes to important purchases. She likes to consult Consumer Reports first, and in her research she discovered a handful of models ranking reliable and safe, while still within our price range. We settled on a 2013 Hyundai Elantra advertised at a local car dealership, and went to take a look.

As it turned out, that particular vehicle was still awaiting title transfer and other paperwork from Oregon. Coincidentally, or not, the dealer had another Elantra, this one a 2015 model, damaged in a recent hail storm, that was good to go. It was a rental car in its previous life. It was a little more expensive, but had slightly less mileage, and was a color that we liked much better than the model we had come to see. More questions answered, and a short test drive later, and we were filling out forms. Surprisingly, to me, the last thing we did was write a check for the downpayment.

We wrote two checks, actually, from our separate bank accounts. We have been lazy and, for whatever reason, reluctant to merge our financial records. I think it comes from us both having been single for so long, and reliant only on ourselves for our welfare. We just are not used to the idea of combined incomes. Well, I hardly have an income, and that has led to guilt and frustration for me. This expense, an unforeseen and large amount, pretty much erased my savings. Earlier in the month I had to write a check in the same amount to repay half the advance from the now-terminated contract to do the spider field guide.

I felt like I went from zero to "adulting" in about six seconds. It is an emotion and stress that has not left me. In fact, it has intensified. I am also dealing with a cantankerous father, who will be 91 on August 8, for whom my cousin and myself are trying to finalize legal documents concerning my dad's will, estate, medical directives, and related matters.

The other aspect of a new vehicle purchase that makes me uncomfortable is my personal view that we, collectively as an American society, should be driving less, using less fossil fuels, and relying more on public transportation, pedestrianism, bicycling, and other modes of transit that are healthier for ourselves and the environment. While I like the idea that I now have a vehicle at my own personal disposal, any day regardless of whether my wife is carpooling with a co-worker, I am reluctant to indulge in that luxury.

So, it is a mixed bag of blessings, curses, and unanswered questions that we face in this new automobile. Where are we going to find the money for the payments and the increased insurance premiums? How much longer are we going to have the old Saturn, and what will become of it when it is no longer useful to us? What will we be sacrificing for fuel, repairs, and other expenses? The prospect of having to get a more traditional "job," outside the home, demoralizes me because so few opportunities for employment mesh with my personal values. It may come to that, though, and while it may be another part of "adulting," I don't know how well I would stomach it.

These days, my progress comes in small doses. Avoiding addictions as coping mechanisms, for example. Accomplishing a load or two of laundry, and writing one blog post may be all I can do in a given day. Avoiding the temptation to flee in the old Saturn. That may, ironically, be another victory.