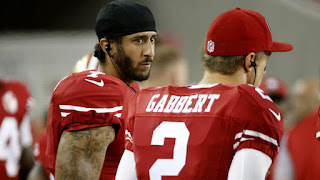 I was hoping I could refrain from making any comment on the Colin Kaepernick incident, whereby he refused to cooperate for the national anthem before a pre-season football game last week. It is, to my mind, a relatively trivial blip on the socio-political seismograph, but there have been too many ill-conceived attempts to either criticize or defend the quarterback's stand (or lack thereof) for me to ignore.

First of all, let me acknowledge his right of refusal to participate in a patriotic exercise. Does he have the personal authority to do that? Of course he does, it is a constitutionally-guaranteed act of free speech. Heck, these days I, myself, find the Star-spangled banner ringing at least a little bit hollow considering how the culture of this nation has degenerated. Home of the brave? We're afraid of everything, and everyone. Back to Kaepernick. Do I think his (in)action had anything to do with something larger than himself? Hell, no.

One man sitting out a pre-game ritual does not in any way constitute a protest. Recruit all of your teammates to do likewise? Now you have a protest. Furthermore, you have leadership, someone courageous enough to incite others to follow suit in a non-violent act of defiance. Kaepernick clearly wants to have nothing to do with anything "team." So, he comes off as a pouting little boy, demoralized that he is no longer the starter at his position, and desperate for any publicity, good or bad. I am almost willing to bet that the whole protest angle was an afterthought. He was sulking, but suddenly recalled a way he could turn a purely selfish act into something face-saving. Is that too cynical?

Wait, you say, aren't there other examples where a single individual forced change, or demonstrated courage that initiated a chain of events by others? What about that dude who stood in front of a tank in Tiananmen Square in 1989? Look at the context. That was during a sustained mass protest by students in China. It was also an act that had strong potential for life-and-death consequences. China does not have the same set of freedoms the U.S. does, and that man was going to face some kind of very harsh punishment.

Rosa Parks, there's a real heroine, no.? I agree. What made her special is that she was no one special until she did what she did; and she likewise had more to fear than (non-existent) social media rants. A lot more. Like lynching, for example. You simply cannot compare a safe exercise in disagreement with social norms, like sitting out the national anthem, with actions that actually violate current law, let alone cultural permissions.

So, yes, you have the right to stand down from the Star-Spangled Banner, burn the flag, and even spout hate as so many have from the safety of their keyboards and snarkphones. Just be aware that the true heroes of the world will quietly conclude that you are being intolerably lame, if not simply reinforcing the attitudes already directed at those of your kind, however we lump each other these days.

Sit down if you must, speak up as you should, but get over yourself. Also, I strongly recommend that "Whites" and "Coloreds" should only be used when referring to laundry. Let's top airing the dirty stuff, shall we? We face too many critical issues to waste time with one person's ego.