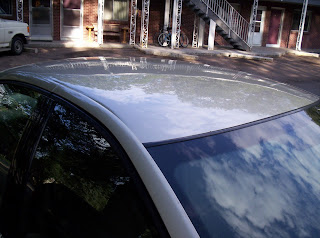 We have hail storms here in Colorado. They are a fact of life that instills fear in every car dealership in town. Right now we are in the aftermath of one of the worst storms of that sort that we have seen in recent years. What I cannot fathom, though, is how a vehicle can be defined as "totaled" by such an event. We need a new definition for what constitutes a total loss.

This is a relatively new concept for me. Remember, I have not even driven a car for most of my life, and still do not enjoy doing so. It is merely a means to get from point A to point B. That's why they call it a vehicle. Until recently, my idea of "totaled" was that the vehicle had been in a collision or other kind of wreck and was completely inoperable, or at least unsafe to drive. Apparently I was wrong.

Ok, so my wife and I did get a good deal on our recent purchase of a 2015 Hyundai Elantra as a result of a previous hail storm; but the dealership was apparently obligated to hammer out the dings before turning it over to us. Is the cosmetic shell of an automobile really that valuable? A pelting of hail can result in diminishing the value of the entire vehicle, engine, drive train, wheels, interior, and all, to the point that is "totaled?" Really?

No wonder our collective auto insurance rates go through the roof. No wonder you see people driving rusted cars or cars with dents they haven't bothered to repair. When you assign such ludicrous value to what is arguably the least important part of the entire object, it forces the owner into limited choices.

My in-laws recently had their SUV broadsided by a deer. The trauma of the encounter was bad enough, but the damage, barely even perceptible unless you look closely, or in the right light, was estimated at $3,800. Wait, this just in: $5,000 to pound it out. Are you kidding me?

The same kind of logic, and I use the word loosely here, applies to agriculture. As consumers, we have become intolerant of imperfections in the cosmetic appeal of fruits and vegetables. At least that is what agri-business tells us. Maybe it is so, but I have been known to bite into blemished apples; and sometimes that orange that looks perfectly fine on the outside is rotten on the inside. What I find truly rotten is waste. We are wasting our emotions, energy, and money on things that are trivial.

A vehicle is an inanimate object (at least until you turn the ignition), but men especially treat it like a living, breathing member of the family. In my neighborhood, some men spend more time on their cars than they spend with their wives and children. That I find appalling. Sure, we depend on our cars to get to and from employment, family that is far away, for trips to the grocery and the doctor and such. Still, maintenance should be minimal, and there are professionals who usually know more about your car than you do. Take a walk to the park with your kids and play catch for crying out loud.

Our society needs to take a hard look at how we relate to transportation anyway. The bus is not the horror most people think it is. Neither is the subway on most days. We need to build walkable neighborhoods, live closer to where we work and play, and start demanding some degree of accountability from the auto industry. Require emissions tests at a federal level. Work to eliminate noise pollution. Remove the stigma from dents and dings, too. Doesn't anyone else find it ironic that industry television advertisements have vehicles driving at excessive speeds, and/or through rugged wilderness terrain, and yet still expect the purchaser to keep it in pristine condition? Please.

I think the bottom line is that we fear judgment from others if we drive a "clunker." As far as I'm concerned, a few mars add character. They tell me you have your priorities straight, that you would rather spend your money on other people than on property. You would rather enrich your life in ways that extend beyond the material. On the other hand, it might also reflect that you, yourself, are in need of financial help, or a better life situation in general. That's ok, too.

Unless your car or truck or van or SUV is a safety threat to you, your passengers, or others on the road, relax.