Why (Some) Americans Don't Want to Work 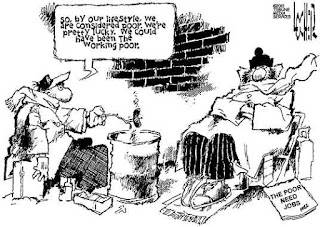 One of the recurring themes in our divided nation is the persistent idea that those in poverty, who may be recipients of federal or state welfare programs, are lazy and do not want to work. I think I may have an understanding of why that is. There may be several reasons, in fact.

Those receiving welfare have something in common with undocumented discouraged workers: they look (up) at the working poor and think "what's the use?" I would hardly be better off if I was employed.

This conundrum is not an accident. It is in the best interest of those corporations profiting economically to point to lower unemployment as an example of how well they have created jobs....when that is far from the truth. So, many out-of-work individuals are not accounted for, are not feeding from the government tit, and struggle in anonymity. Meanwhile, corporations are relieved of the "burden" of hiring more workers.

The major source of complaints about welfare recipients comes from the next rung up the ladder, the working poor. They believe that their tax dollars are going to let "those people" get something for nothing; or, worse yet, they view the poor as scam artists who are maximizing their take by having extra children to boost their subsidies. Meanwhile, low-wage earners are working two or more jobs, maybe trying to go to school as well, having to pay for daycare if they have children, and praying they don't have to take a sick day. It is not an enviable lifestyle, and those receiving welfare have something in common with undocumented discouraged workers: they both look (up) at the working poor and think "what's the use?" I would hardly be better off if I was employed.

Now we finally come to the middle class, those who have some degree of disposable income....or do they? The truth is that we have a debt class masquerading as a middle class. The lifestyle of the Jones's is propped up on a mortgage, car loan, student loans, and credit card debt. They are one paycheck away from being working poor, if not welfare recipients, themselves. Somehow, though, they do not have much empathy for those beneath them on the socio-economic spectrum.

The real welfare queens are, of course, industries and corporations that are floundering in the free market we cherish so dearly. They have become dependent on, if not addicted to, government bailouts, subsidies, tax breaks, and other forms of institutional welfare. Meanwhile, the CEO that drove the company into the ground escapes on a golden parachute. Where is the justice? More importantly, where is the outrage? Why do we take out our frustrations on the most vulnerable instead?

The American Dream has always been about aspiring to material wealth, even to the point of excess. We have to have a new dream where everyone has a basic standard of financial security.

We apparently feel powerless to battle against big business bullies and the irresponsibly affluent who have no interest in anything but padding their bank accounts. It is easier to flog the lower class who we view as equally responsible for our inability to ascend the ladder of prosperity, though they are not even remotely as culpable as those at the top. The American Dream has always been about aspiring to material wealth, even to the point of excess. So, why would we break off the very pinnacles we want to attain ourselves? The answer, in the name of stress-reduction and sustainable economics is that we have to have a new dream where everyone has a basic standard of financial security. Everyone. I'll talk about how to do that in my next post.