The Immigrants My Ancestors Were 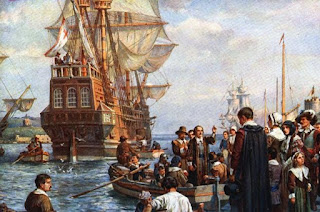 The roots of my personal heritage literally go back to the Mayflower. I suppose I should be proud of that distinction, but as I have grown older the novelty has worn thin and my more informed understanding of history, thanks to enlightened friends and obscure media outlets, has left me less than comfortable with my ancestral privilege. I take less for granted now, and have even more respect for those who have succeeded despite the governmental, cultural, and social obstructionism they have faced. Recent executive orders and openly hostile segments of our U.S. population are making me question what we are so afraid of, and the answers I suspect are ironic and troubling.

When my forefathers arrived in North America there was no United States. The land was occupied by indigenous tribes which either embraced the European aliens or slaughtered them, depending on which accounts you read or have been exposed to. Back in my day, at least, little mention was made in the textbooks about the diseases the White Man exposed the natives to, and how those illnesses devastated indigenous populations. I suspect this fact is still omitted from school lessons in an effort to protect our heroic Caucasian reputation.

We certainly don't make a habit of discussing our legacy of Native American oppression, from confining entire "tribes" to bleak reservations, stealing their children and placing them into boarding schools where they were "re-educated" to conform to the standards of their new White masters. Somewhere between the noble savage and the sworn enemy of progress lies the truth between stereotypical extremes. We still excuse ourselves today, turning a blind eye to the routing of indigenous Nations from where we have already banished them if it blocks the path of a pipeline, or sits atop an oil or gas deposit. Progress today is measured in White profit only.

Dare I even get started on how we have treated Blacks? Equally shameful. Again, we have barely progressed in the realization of past mistakes, while continuing to invent new transgressions. Reparations? Between Native Americans and Blacks alone, our debt of guilt and shame dwarfs the National Debt by several orders of magnitude, as it should. By some miracle of forgiveness and faith, these "minorities" have refrained from violently overwhelming us. Instead, most have exhibited remarkable tolerance, and extended the hands and hearts of friendship and cooperation in all segments of our society.

So, I ask you, those who stand behind measures to ban refugees, build a wall to block those seeking a better life, and exile those who are already here because they are of different faiths or cultures, what are you so afraid of? I think I know. You fear that what we once did to the natives and other minorities will now be done to you, to us. How ironic and awful that our own shame and guilt have morphed into toxic "protectionism" and nationalism. Those are poorly-disguised versions of racism, and you know it. We persist in this framework at our collective peril. No one profits from this mindset and the behaviors that stem from it.

The only way I can overcome my personal angst and sorrow over the fire my forefathers started is to not remain oblivious, idle, or silent. I am not proud of the errors of the past, but I am proud to recognize them, and to not ignore the ongoing plight of those less fortunate, regardless of their ethnicity, origin, or religious beliefs. The societal privilege I enjoy is a sheer coincidence of skin color, gender, and genealogy. Yes, it comes with historical baggage, too, but I own it. How about you?