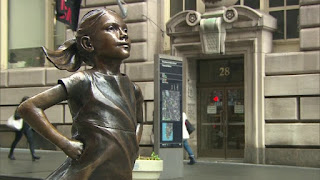 I am disappointed in Fearless Girl, that bronze figure in front of the iconic Charging Bull sculpture on Wall Street. Ok, it is my fault, actually. I took her symbolism in an entirely different direction than the artist who created her intended. Still, I find myself angry at the artist responsible for the bull wanting to evict the innocent child standing in defiance before his angry bovine. I wonder if this is just the beginning of art depicting culture wars.

When I first saw images of the pony-tailed pixie, I was delighted. My assumption, a naive one it turns out, was that she was a literal stand-in for the proverbial little guy. You know, those of us whose investment portfolios consist of a PayPal donate button on our blog, and two to four lottery tickets when the pot gets big enough to remind us there is a lottery. Those who in no way, shape, or form can participate in the stock market. That is who I thought our heroine was standing for.

Come to find out, the point of the diminutive Miss was to draw attention to the lack of women on corporate boards, let alone the near absence of females running those boards. Oh, boy. Oh, girl! While I am no sympathizer for male privilege, I could still feel my heart sink at this revelation. Not only that, but the statue was commissioned by one of the world's largest financial firms: State Street Global Investors, based in Boston. What I had thought might be more of a monument to the Occupy Wall Street protests turned out to be not the slightest bit sympathetic to the working class. She was installed on March 7 of this year, on the eve of International Women's Day, so I probably should have made the connection.

A circular plaque at her feet proclaims "Know the power of women in leadership. SHE makes a difference." Conveniently, the "SHE" is not only gender-relevant, it is the acronym for State Street's fund's NASDAQ ticker symbol. I see, so she is an advertisement as well as (instead of?) art. To its credit the fund itself tracks the stocks of more than a hundred companies that State Street sees as exemplary leaders in promoting women in the corporate sector. The pure artist in me still views this as a sell-out.

Meanwhile, the creator of Charging Bull is snorting at having his creation upstaged by the kid. The original intent of his statue was to provide an uplifting symbol in the wake of the 1987 stock market crash. He donated the 3-ton work, and friends helped him install it in the middle of a cold winter's night, right in front of the New York Stock Exchange. It was almost removed by city officials who deemed it a traffic hazard and "nuisance," but public pressure resulted in the statue being relocated to its current place in Bowling Green Park, two blocks away. 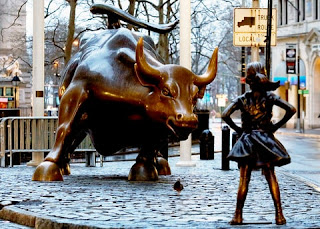 The Sicilian artist, Arturo Di Modica, worries now that the meaning of his sculpture has been corrupted by the little squirt-in-a-skirt, saying that the bull now symbolizes male chauvinism. Hey, if the hoof fits....The bull will always symbolize to me how the ultra-wealthy throw their weight around. The china shop is the local economy, your neighborhood grocer, mechanic, hardware store owner, and every other business you used to be able to rely on before they got swallowed up by big box stores, and even bigger agriculture, banks, and fossil fuel barons. There is a wasteland in the wake of that bull, and we all know it. We still fear it, save for the few that occupied Wall Street for awhile, and maybe Bernie Sanders and Elizabeth Warren; but they still think the stock market can be regulated. One could argue it should be slayed.

Fearless Girl currently has a permit from the city to stay put another year. I do like that outcome, but when her time has come, if it comes, perhaps we should replace her with a matador sticking a few blades into that son-of-a-beast. When I win the lottery, or get enough blog donations, maybe I'll commission that statue. Heck, I'm even willing to make the bullfighter a woman.