"Jobs" and Other Trigger Words 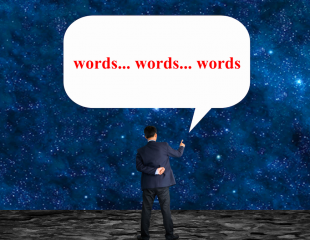 Remember when "sound bites" were all the rage, both in the popularity of their use and in the anger they incited in journalists? Those were the good old days. Today, politicians can use just a single word to evoke an emotional response that sways voters to support them, or to dismiss issues and concerns of their opponents. Is our collective attention span as citizens so short, and our reluctance to do a little homework so great, that we will allow ourselves to be so easily manipulated?

We are all familiar with certain trigger words. "Jobs" for example. We hear someone utter just that word and our gut reaction is "Good. Jobs are good. He/she is going to do something about creating jobs. We need more jobs." It is a word that reduces every other concern to something meaningless and expendable in the interest of creating....jobs. We never ask "how many jobs?" or "how long will those jobs last?" or "will our locally unemployed be qualified to do those jobs?"

The implications of "jobs" means that environmental health, and consumer and labor regulations may need to be sacrificed if you want more jobs. We all understand this by now. That is how powerful a trigger word can be. All of these emotions, issues, and actions can be triggered by just a single word. "Crime" is another. We understand that when a government official or political candidate says they will be tough on crime, it means that we will lose at least a bit of our privacy through surveillance, security checkpoints in public buildings, and data retrieval from our communication devices.

"Taxes" are perceived almost universally as a bad thing, and the word is now almost synonymous with "stealing" from our wages (income tax), purchases (sales tax), home ownership (property taxes), and every other aspect of our lives. Taxpayers have not been properly educated in the collective benefits we receive in exchange for taxes. Public education, parks, roads, public transportation, libraries, museums, zoos, and a host of other public services and facilities could not exist without support from taxes.

Still, politicians promise "no new taxes" or "tax cuts," meant to spell "relief" and appease those at the lower end of the wage scale. The reality is that most of those cuts are inevitably granted to those individuals and corporations, that are already highly prosperous. Tax law is another tool to redistribute wealth to the wealthy elite, the way it is currently being written and executed. We are so conditioned to think of "tax relief" and "tax cuts" as beneficial to us, that we don't think any more about it, we just react positively even though most of us will not see meaningful changes to our bank account.

I could go on and on just listing more trigger words and phrases like "immigrants" and "Islam" and "pro-choice," "pro-life" and "clean energy" and so forth, but I give my readers credit for being able to recognize the intent with which those words are chosen and used, like so many verbal bullets and bandages to provoke fear and loathing, or calm and soothe in order to create false empathy. Each side of a given issue knows exactly what the other side means when it uses a trigger word. The same word can be interpreted completely differently depending on your party or ideological persuasion; and used as a hostile epithet or a badge of honor.

How do we get over this language barrier? Can we? Honesty. That is the only answer. When my parents were divorcing, back in the 1970s, I remember the phrase "the best interest of the child" being a mantra. In contested divorces, when a parent says that, it really means not only that they believe they are the best parent to have custody, but that the other parent having custody is the worst thing that could happen to the child. Cloaking selfish interests in language that suggests altruism is repugnant and intolerable. We have to start speaking honestly and fearlessly.

Be honest in why you object to a public policy, political viewpoint, or other issue that ignites your emotions. Only when we see each other's real motives are we going to make progress, and take action acceptable to the majority.