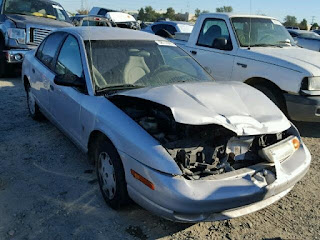 © Autobidmaster.com
My wreck was not this bad, but still....

I was going to write about this even before my minor one-car accident, but that event just served to drive the lesson home in a most painful way. When you are behind the wheel, the only thing you should be doing is driving. Nothing else. Absolutely zero distractions period. I drove our 2002 Saturn SL into a rocky ditch at about twelve miles per hour because I was fiddling with the air conditioning buttons. I was lucky. I almost rolled it, but didn't panic and gently maneuvered back onto the roadway. Still, the car suffered enough damage to alignment that it would have been over $3,500 to get it repaired; and that did not include both right side doors. No injuries, just a bruised ego, but I can write-off the rest of my summer now as the car is totaled.

I am never that guy. Ever. I don't eat or drink while my vehicle is moving. Heck, lately I don't even have the radio on. I certainly don't text, or even answer my cell unless I am parked or at a stop light. I don't put on make-up or comb my hair (what little is left of it, getting grayer by the second after this incident). My full attention is on the road in front of me, with occasional glances in the rear view mirror. I drive defensively, fully anticipating that every other vehicle around me is driven by a maniac, idiot, or simply oblivious operator. I leave plenty of space between myself and the car ahead, stop well behind them at intersections, and always use my turn signal. I do everything in my power to insure my safety, and the safety of others. Except on Thursday, June 27.

I was in Cheyenne Mountain State Park, making my rounds of the restroom buildings in search of moths attracted to the lights the night before. The day was heating up quickly, and my last stop was at the bottom of a steep, winding road into one of the campgrounds. On the way back out, I decided to turn on the A/C. It did not feel like any improvement, so as I crept back up the road at no more than the designated fifteen mile per hour speed limit, I looked down to see what buttons might make a nice breeze happen. Looking back up it was already too late. The car had missed the curve and over the embankment I went. Camera, cooler, and backpack all went tumbling against the right passenger doors. There was the sound of crunching plastic as the exterior of the doors cracked, and an unsettling scraping sound as the undercarriage skipped over the large rocks in the ditch.

I got the car back to a parking lot and made an inspection. The passenger doors looked really ugly, but aside from some scratches underneath, things seemed remarkably ok. I was not even leaking any fluids. It did become apparent that something was dreadfully wrong as I drove out of the park, though. The car, left to its own devices, swerved to the right. Hard.

My wife accompanied me to the mechanics she has trusted the car to before I inherited it, and we got the results of their assessment the next morning. It would take more than our free lifetime realignment guarantee to get the car driving straight again. Several bent parts quickly escalated repair costs into the stratosphere. We simply don't have that kind of money to throw at an elderly automobile. It appears we will manage a whopping $150 for it at the local wrecking yard. There is not enough metal in it to warrant a bigger payout.

Let's get back to the moral of the story: Any kind of distraction while operating a motor vehicle can kill you, literally or financially. It can kill other people. It can shake your confidence to its core. There is no possible way there can be a good outcome from multitasking on the road. Something, or someone, is going to suffer, probably permanently. You are using up your nine lives every time you attempt to do anything other than look at the asphalt and other vehicles and pedestrians and bicyclists and motorcyclists and wildlife and stray pets and traffic signs and signals and....You get the picture. It is crazy out there in traffic, and even when there is no traffic. You have to assume something could go wrong at any time and be prepared to act in a preventive fashion. You cannot do that if you are having a phone conversation, taking a bite out of your burger, or even turning to look at your passenger. Eyes on the road. Please, I'm begging. Don't be like me on June 27.