A Letter to Senator Cory Gardner 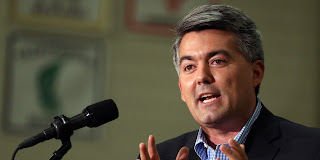 Clever. Clever, but cruel and cowardly to draft, in secret, healthcare legislation that will impact millions of citizens. Who could complain about a bill that they haven't even seen? Shucks, not even most senators have been privy to the plan. Maybe that is what the President means when he says this is a "mean" bill. Meanwhile, the rest of us are left to do what? Rely on what the American Association of Retired Persons (AARP) is telling us? No matter, given past and present trends and tendencies of this session of Congress and this presidential administration, we can piece together what we are in for if this bill passes the Senate. So, please understand that the overwhelming majority of your constituents, including this one, are vehemently opposed to this bill and we expect your vote to reflect this. You need to defeat this bill.

This goes beyond party politics. Democrats have also been all talk and no action, at least tacitly approving of legislation that undermines the welfare of our citizens. We can see through the rhetoric because actions speak louder than words and those actions of late have been highly detrimental to domestic and foreign policy. Right now, the "America first" slogan applies only to rich, Caucasian, and mostly male Americans, and everyone else is left to fight among themselves for the scraps from the feast at the top. This is an irresponsible, repugnant, and intolerable approach to governance. Charity begins at home, and that means that government should be concerned first for its most vulnerable citizens. Children, the elderly, and the destitute will suffer the most from the healthcare bill put before you now. How in good conscience can you approve of this oppressive bill?

A pre-existing condition of many politicians appears to be extreme focus on survival of the financially fittest, but even natural selection is a random force. Life is not fair you say, but I say that our purpose on this planet is to at least try and make it more fair, to increase opportunities for working class families and individuals to prosper. No one can prosper without good physical and mental health. Undermining options for healthcare only weakens the consumer economy. How can you and your colleagues not see that? Should you wish for your own political career to survive, it is in your best interest to start mirroring your home state citizens' wishes, and distance yourself from the influence of industry lobbyists. Thank you.