All I Want For Christmas Is....Less 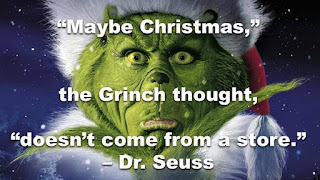 It occurs to me, as the holidays approach ever closer, that material things mean less and less to me, and the appeal of "presents" under the Christmas tree is virtually non-existent. I am not about to rob anyone of the joy of giving, and receiving, but my personal reflection goes to what I could do without, from actual objects and conditions to intangibles. Food for thought, anyway.

Less stress would be nice. In fact, I bet a great number of us would trade the latest techno-gadget for relief from credit card debt, student loan payments, workplace politics, family drama, the daily commute, and an infinite list of other stress-inducers. Instead, the holidays seem to compact all our stresses into one neat, unbearable bundle, don't they? My personal belief is that on occasion at least, we need to avoid stress. Maybe that means spending Christmas and New Year's with friends instead of relatives. Maybe it means politely requesting that you don't exchange gifts this year, at least not the adults. Lower that burden on your charge card a little.

Less stuff would be helpful. I have so much clutter that I cannot even find a lot of what I own. How did that happen? Luckily, I barely have an income, so I am not accruing much in the way of new material these days. The problem is that I cannot seem to unload most of my existing possessions in exchange for even a little bit of money. I do not mind donating. I did that with my insect collection, do that with clothes, used electronics....but c'mon, I need to not be on the short end every time. Ah, well, there I go complaining again.

Let me think outside the box of "me" for the rest of my space in this post. Ah, less urban sprawl would be wonderful. We don't have to develop every single acre of land, or annex every suburb. We can rebuild it, make it better than it was, stronger, faster,....wait, that was the premise of The Six Million Dollar Man. It still applies to cities, though, including the one I am living in that seems to despise the idea that land use planning and "infill" are viable options. Gas, food, and lodging at the interstate exit seems to be an excuse to build an entirely new city these days. Enough.

Less government interference. Wait, wh-a-a-a-a-t?! This is coming from me, a certified "Liberal?" Who are you, and what have you done with the real Eric Eaton? Hey, if "Conservatives" have accomplished anything in the last year, it is to convince us that they were right all along: government is too intrusive, and clearly represents no one but special interests. The only problem is that too many Republicans are still blind to this reality; and they hold fast to the idea that pro life, gun rights, the "War on Christmas," and other far-right agendas are real issues and not the invention of their political party. We do have a common foe: class warfare. It is not "fake news." Ignore it at your peril, unless you are one of the "one percent."

Fewer natural disasters, please. Sigh. As I write this, wildfires are still raging in California, and we are experiencing severe drought in other parts of North America as well. We've been belted by hurricanes, inundated with floods, and scientists suspect this is just the beginning in terms of a geologic timeline. That's alright say the short-sighted economists, who beg and plead for the abolishment of environmental regulations that are all that stand between us and a climate apocalypse by what amounts to tomorrow (on a geologic timeline). Everything is expendable if it means infinite short-term profits for corporations, their CEOS, and shareholders. I know, I've said that before, but it bears repeating. Daily.

What do we do? We do less shopping. We share stuff instead. We do more donating to charities, thrift stores, and organizations that understand what is at stake and that fight tooth-and-nail to protect your rights as a U.S. citizen, member of the workforce, consumer, and citizen of planet Earth. We grow our own food where possible. We eat smaller portions. We stop "coping" by using alcohol, tobacco, drugs, and other substances. We take our clear heads and focus. We love each other. We stop living in fear. We do with less because we can.