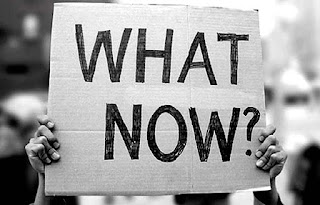 That is the story of my daily life now, asking that question; as in "What is the catastrophe du jour?" What is it that the local, state, or federal government is doing today to screw over those of us who actually understand what matters, what is in the public good, and what is necessary for long term survival and prosperity? The current state of the world has left me impossible to live with. My wife endures my almost daily bouts of ranting, understandably pleading with me to "calm down." Were it only possible.

I am a little better than I used to be. Were I still at my thirties, even forties, level of maturity, we would have been replacing our television every other week because of some heavy object I would have thrown at it. I would quite possibly have a criminal record for trespass, protesting without a permit, or some other violation of local codes. I would be cursing a blue streak in public, as an accent on loud outbursts in banks and government agency offices. I have toned it down, Honey, you have to believe me.

This is setting up to be the perfect storm of all things ugly. The attack on our public lands is relentless and brutal. Meanwhile, the tax "plan" that will effectively redistribute wealth from the middle class to the ultra-rich guarantees that we will not be able to donate as much to the watchdog groups that have in previous years been able to thwart dastardly government plots. Charities are going to be starved by the new tax codes, and that is all part of the plan, no conspiracy theory necessary.

Even the sexual harassment revolution, which is otherwise a very positive movement, has quickly devolved into desperate political party power grabs. Democrats and Republicans alike are now seeking to unseat each other's best Representatives and Senators so they can be replaced by their own party's candidates.

Many of us face local, state, or regional issues as well, and our energies are thus splintered and diluted. We end up compromised in our output for our employers, and in our devotion to our families. Freelancers like me spend our days signing petitions, blogging, posting to social media, and otherwise engaging in passionate advocacy that fails to pay our bills; but we cannot stand idly by. The City of Colorado Springs has big plans for "my" backyard prairie wilderness that I want to have declared an Open Space. I even did a television interview earlier this week, and am approaching my City Council district representative about holding a public meeting before things get any more complicated. No doubt you, dear reader, face some local problem of your own. Maybe you are in southern California and just got displaced by a wildfire.

Smart as we are, do we not get distracted easily by tweets from the President, the latest celebrity gossip, the impending royal wedding, the supposed War on Christmas, and other media-manufactured garbage that passes for the news these days? I would rather they just fill the five o'clock broadcast with cat videos from Youtube. It would be more informative, and a hell of a lot less depressing. It would also unite us instead of dividing us. Who does not enjoy a good laugh that is generated from something unrelated to politics, religion, or business? Instead, we are bombarded with stories that pit us against each other while the wheels of the aristocracy are free to continue undermining our livelihoods in every way, shape and form.

I cannot help but do what I do best: write, from my heart, my mind, my soul, in hopes that by hammering away on my keyboard I am hammering away at injustice, little by little, together with others doing the same thing. I aim to generate empathy, compassion, and enthusiasm for what could be, rather than what is, or what could get worse.

A video is going viral today of a man desperately trying to capture a wild rabbit just feet away from one of the California conflagrations. It is in many ways the most perfect analogy for our times. The video is at night, the man an anonymous silhouette of emotion and determination, intent on saving this one little creature. And, spoiler alert, he succeeds. What difference does it make, you ask? It means everything to the rabbit; and each positive action, no matter how small, adds up. Do your bit.