Last week a friend in Hawaii broadcast on Facebook the alarming....well, alarm, he received on his cell phone, informing him and everyone in the state of the impending arrival of a ballistic missile. Turns out it was indeed "not a drill," but not a military attack, either. It got me thinking about how much we take technology for granted, and how we seldom think about its weaknesses. 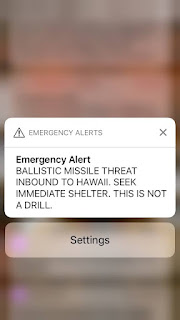 The false alarm this time was mostly human error. During a shift-change training exercise, an employee at the Hawaii Emergency Management Agency simply selected the wrong option on a dropdown menu on his computer monitor. Naturally, there was no option for issuing a false alarm broadcast after the alarm was triggered. That has since been added via a "cancellation template," but maybe a dropdown menu is not the best format, either.

The mistake was then compounded by the delay in rescinding the false warning. The warning went out at 8:07 AM on January 13, and was not officially retracted until 8:45, thirty-eight minutes later. Ok, we are talking about cell phone communications here. Governor David Y. Ige did manage to get a correction out seventeen minutes after the alarm via....Twitter. The Governor would have done that almost instantly, but he had forgotten his Twitter username and password.

There is so much wrong with this event that it is difficult to know where to begin. At least the alarm was sent through every conceivable media outlet, from radio and television to mobile devices and digital freeway signs. What if you happened to be somewhere that those technologies did not reach? Some people who did shelter as instructed found themselves in locations without a cell phone signal. So, they did not receive word directly of the error.

Consider also the fact that most of our communication systems in use today require power. Forget to charge your phone on this fateful day? Oops. Were there a power outage, how reliable are backup generators and other emergency power sources? Please tell me you have backups, Hawaii Emergency Management Agency. Hello? I will assume the best scenario for now, thank you. 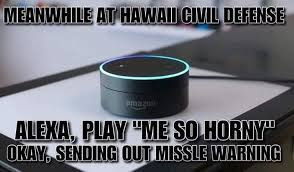 © TheFirearmsForum.com
Not funny, but can't you see this happening?

The other troublesome aspect of this that jumps out at me is the assumption that every citizen in the state of Hawaii has the same level of technology at their disposal for receiving emergency warnings. Even if you have an iPhone or a an android smart phone, what if you draw the line at Twitter, or some other app that is crucial to the receipt of emergency information? I am assuming the state is not issuing phones and apps to all of their residents and tourists. The choices you make could conceivably get you killed. I know my father would likely not have fared well. He is not friendly to computers and related gadgets, and he is so hard of hearing that even a siren might escape his notice. Hope there are some good Samaritans out there in emergencies like this.

Technological applications can not only amplify existing vulnerabilities in the devices and materials they are applied to, but they bring with them their own special vulnerabilities to hacking and misuse and, yes, simple error. There are historical cases of pre-digital era mistakes that have almost caused the U.S. and the former Soviet Union to launch their ballistic missiles. I hardly want to contemplate what scenarios could take place given the "advances" in code that we have now.

I am not advocating that we all become Luddites, but somewhere between an outright rejection of contemporary technology and advocating that it be applied to everything, there is a happy medium. Right now we are putting the lives of those who choose, and can afford, the latest gadgets and software ahead of those who do not have hundreds or thousands of dollars to throw at the latest and greatest phones and tablets. Those who seek a life without the daily stress that social media and technology burdens us with are left in the lurch in instances like this missile warning. Good luck to us all.