The other day my wife finished showering and informed me that the water heater must be malfunctioning and I would need to address the problem the next day while she was at work. This brought up all kinds of insecurities about my manhood and marital obligations, but I ultimately triumphed, thanks to the support of even more....women. 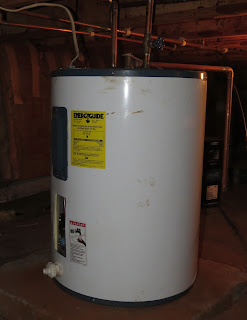 There it is, striking fear in the hearts of men!

There is an awful lot of truth behind that old adage that behind every good man is a good woman, and I might add "often several women." Siblings, other relatives, friends, social media acquaintances, they all can be encouraging in your time of need. I honestly had not anticipated the account of the water heater to take this direction, but it is absolutely where it should go, to the heart of human relationships, self-confidence, and lifelong learning.

Our first approach to the water heater problem was to solicit recommendations for a plumber via local Facebook friends. My plea was answered in part by female friends who advocated doing the repair ourselves. Ok, that would be me, then, while my spouse earns our household some income. I do not do well with the handyman thing, but in my defense I spent my teenage years without a father on a daily basis. My folks divorced when I was age eleven, and I saw my father every other weekend. He lived in apartments where repairs were done by contractors.

"Just look up how to repair a water heater on Youtube. You'll be fine" said a couple of handywomen on my "friends" list. They added that expiring heating elements were usually the source of the problem. My wife went about finding some videos and e-mailed links to two of them. I viewed them the next morning and while things always appear straightforward in those how-to short films, they *never* represent the exact model or circumstance that you will encounter with your own appliance. My nerves were still fraying.

As luck would have it, Heidi was carpooling to work this day, so I had our car at my disposal to fetch the necessary hardware and tools. Only problem was that I had not driven but once in roughly the last five months, so I was a little edgy about that prospect, too. I did find the courage to get behind the wheel, and was not as white-knuckled as I feared I would be. I even managed to find some helpful people at the hardware/lumberyard/garden supply/nursery store once I arrived. About forty minutes and forty-three dollars later, I had what I needed. 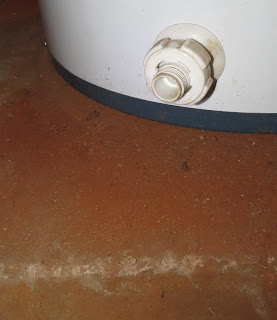 You have got to be kidding!

Our water heater is a short, squat cylinder located on a cement pad....in the crawlspace under our townhouse unit. You will notice that the panels I needed to access the heating elements are on the "dark side," not illuminated by the single bulb in the crawlspace. Also, the drain for the tank is about three inches from the floor of the crawlspace. I first attached a hose and ran it into a bucket, but the effectiveness of that strategy dried up quickly. So, I took to wedging another bucket under the spigot, filling it as far as I could without overflow, and dumping it into another bucket. About two hours or so later I decided I had probably drained the water heater pretty well. 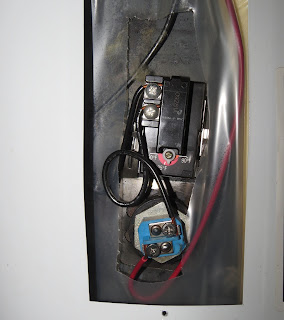 Now to disarm this water-bomb

Note to self: Think you have drained the appliance below the level of the bottom element? You haven't. Black water blew out the opening once occupied by the withdrawn heating element. I quickly rammed the new one into the void. Success, with only mild, wet, annoyance. The upper element offered no such surprise, and the tank filled in next to no time. Heated water was available again in roughly two hours. Meanwhile, my body is still recovering from trip after trip lugging a bucket with at least four gallons of dirty water out of the crawlspace and into the parking lot to dump it. Drain, dump, repeat. Still, before I started, I had visions of Heidi finding my smoldering, electrocuted corpse under the house when she got home.

While I suspect that the true cost of this DIY exercise would have included renting a pump to properly drain the water heater, mission accomplished. Self-confidence was increased as well, though I still do not look forward to the next appliance breakdown. The real bottom line is the silver lining of learning, growing in "handymanship," and gratitude for friends who have confidence in you even if you lack it in yourself.