A Longing For Fairness 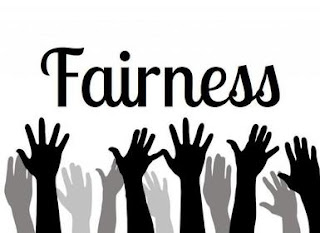 Perhaps the one wish we all share in this holiday season, after world peace, is a more just and fair society. Even most of us with White Privilege have a sense of humility at this time of year, even if you are not the Secret Santa who passes out one hundred dollar bills randomly, or someone who donates to Toys for Tots, the local food bank, or some other charity on "Giving Tuesday." There is, however, a deep undercurrent of anger and misguided energy that surrounds our sense of injustice and unfairness, and that has to be addressed daily, maybe even hourly.

The statement "life isn't fair" always raises my own ire because it is an easy way to dismiss injustice and preserve the status quo for those who benefit by it. It is an excuse for inaction at best. Today, that statement of acceptance of injustice has been turned into a weapon that is being used not just for ignoring problems, but further punishing those already suffering. The idea that "life is not fair" now excuses greed, racism, bigotry, nationalism, and flaunting the rule of law, among other heinous behavior.

Blame and accusation are too often the overriding symptoms of unfairness, even if they are legitimate in their claims. When we start pointing fingers and raising our voice, then we are being "militant," "uppity," and unfair ourselves if we start making demands for change. The flip side of that coin is suffering, and collectively we have limited tolerance for that, too. Those who give voice to their pain are "whining" or "complaining," and we downplay the intensity of their desperation. We are thus dismissed as "radical" or "pathetic." Damned if we do, damned if we don't.

Another symptom of the unfairness disease is an investment of emotional energy in matters that are trivial. I myself am guilty of this during football season. All my anger is channeled into hatred of dynasties like Alabama and Oklahoma football, the Pittsburgh Steelers, and other teams that have dominated the stage for decades. My dream? A different team wins the championship every year, spreading the wealth and joy. This is a horribly shallow and inconsequential desire when people are dying for lack of affordable healthcare, are homeless for lack of affordable housing, are hungry for lack of employment, and addicted because that is how they have come to cope with the unfairness of their circumstances.

Our blind hatred, even when directed at appropriate figures and factions, has allowed our sense of fairness to be corrupted in other ways. Many people view taxation as "theft," that the government is "stealing" your hard-earned money. So, when right-wing candidates campaign on a platform of tax relief and tax cuts, they are embraced with a zealous fervor that we usually reserve for athletic teams. The irony is that these candidates, once in office, effectively do steal from their citizen constituents, applying those tax cuts mostly to persons who are already wealthy beyond our wildest dreams. Candidates, and those in office already, conveniently fail to remind voters that their taxes pay for the common good in the form of roads, schools, libraries, parks, and many other amenities vital to our society. In fairness, it is hard to believe that given the state of our pothole-pocked streets, closing and failing schools, and desecrated parks. That is because government no longer feels the need to be accountable to anyone but the most wealthy.

It is inappropriate and inexcusable to point fingers at any "minority," race, ethnic group, religion, gender, or other convenient category of human beings and accuse them of being the root of all of your problems. We have to begin assessing individuals in power by their actions, not their platforms, by their behavior and not just their rhetoric, and take responsibility for our own actions. We can set an example through personal sacrifice, respect for others, and ceasing our aspirations to excessive material wealth. We can share our ideas for how to effect long-term change through our activities in the marketplace, our engagement with other citizens, and our commitment to personal and environmental health.

The next time someone says "life isn't fair," agree with them and then ask them "so what are you going to do about it?" Remind them that as human beings it is our obligation, indeed our duty, to try and make life more fair. Happy holidays.