What is a statue if not rigid, impermeable, unmovable, defiant of the elements that would change it? Copper to cyan, stone to dust. What does a statue represent if not a memorial, nay, a celebration, of history, right or wrong? Concrete figures, concrete ideas, ideals. This is what we are being asked to sacrifice right now, and it is the most minor price to pay. 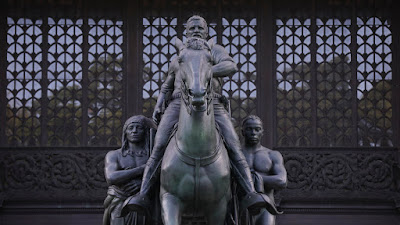 The hostile, even violent sentiments and actions directed at those who are advocating the removal of symbolic representations of racism, overt or rendered invisible by most of the historical record, is disappointing at best, and an infers personal racist tendencies at worst. Are those Black Lives (that) Matter reaching? Is this a witch hunt in which no white, political, military, or social hero with a sculptural remembrance is safe? Maybe, but more likely white people have never been exposed to the entire truth.

If you are unwilling to entertain changes to something as trivial as statues and namesakes, then how can you possibly be willing to make the necessary changes to social, political, legal, economic, business, and religious institutions that continually oppress people of color?

Personally, I associate Theodore Roosevelt with the founding of the national park system, and other conservation initiatives. I am well aware he was a hunter, and that his attitudes towards some species were, in retrospect, completely uninformed, to put it politely. I choose to acknowledge that and temper my respect for him accordingly. Now that I learn his image is a target of anti-racist activists, I need to do more research, not mindlessly object to voices calling for removal of public monuments depicting him.

Even entomology, my other chosen field of endeavor, has not been immune to serious confrontations. The Entomological Society of America, at its regional and national conferences, features a quiz event called the Linnean Games, after Carolus “Carl” Linnaeus, an eighteenth-century figure known as the “Father of Taxonomy,” the classification of organisms. Many insect species bear his name as author but, apparently, he also attempted to classify our own species, Homo sapiens, into different categories, some of which reflect horribly upon Linneaus’s character. There is now a furious uproar between those who want to rename the Linnean Games and those defending the status quo.

The energy devoted to defending individuals of dubious ethical quality should disturb us all. The obvious but unspoken question is: If you are unwilling to entertain changes to something as trivial as statues and namesakes, then how can you possibly be willing to make the necessary changes to social, political, legal, economic, business, and religious institutions that continually oppress people of color? Your voice speaks loud and clear that you are more interested in protecting the past and the present than you are committing to a new, brighter, better future.

Your comfort is overrated, especially compared to the daily fear that black people have for their very lives. Too many white people who protest they are “not racist!” still accept blacks only under certain conditions. Black servants and entertainers (and I lump professional athletes in this category) are acceptable. Even then, we decry that they are overpaid, and probably thugs off the court or off the field. Blacks in other professions? They only advanced in their careers through the reverse discrimination of affirmative action. They got through college via scholarships for blacks only.

Far more inflexible and resistant to change than statues are our own minds. That is the tragedy in all of this. Even air pollution, bird guano, rain, and wind erode the stone- and metalworks. Why is nothing nibbling at our psyche? We are blessed by our Creator, or through evolution, or both, with an infinite capacity to adapt to changes, be they physical, social, economic, or emotional/psychological. Too often we conveniently ignore that and persist in beliefs and institutions that protect our self-interests at the expense of others. That is not even what other animal societies do. It could be argued that elephants, cetaceans, and Bonobos are light years ahead of us.

Lastly, resisting what Black Lives Matter and others have started is not only futile, it goes against your own self-interest as a middle- or lower-class Caucasian. I promise, no, guarantee, that if you embrace the values inherent in this movement it will elevate your life to unimaginable heights. If you cannot fathom what true equality looks like, simply imagine a more empathetic, compassionate, prosperous version of yourself. Now, act like you are already there.