In yet another spectacular display of incompetent leadership, democrats in the U.S. have allowed republicans to define “cancel culture” as a series of trivial matters in the marketplace, while those same republicans initiate and enact legislation that represents true cancellation of human rights. The electorate should be intolerant of this, and act accordingly. 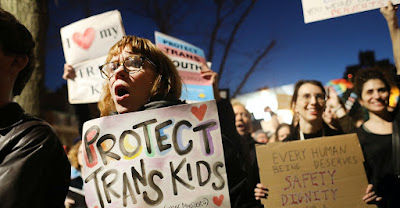 The world is not going to fall to pieces because we have fewer Dr. Seuss books. In fact, the decision to discontinue printing some of those titles was made by the publisher, not driven by democrats or any other political entity. Socially responsible corporations are a rare thing these days, and should be applauded and rewarded.

Compliments also to toy manufacturer Hasbro for re-branding Mr. Potato Head as Potato Head in recognition of the reality of non-binary people and transgendered persons. These landmark decisions, without interference from politicians, without threats of litigation, and in the face of potential consumer backlash, represent bravery and compassion. Could we only say the same for our elected officials.

No, at the state level, legislatures and governors are waging war against the most vulnerable and underrepresented citizens, actively encouraging continued discrimination, violence, and poverty. It is utterly transparent that the measures being taken constitute a power grab, or a means of perpetuating toxic power. White, cis, straight, patriarchal supremacy (“white supremacy” fails to convey the full scope of this paranoid, colonial mindset) no longer bothers to cloak itself in the flimsiest of disguises.

In Georgia, new legislation aims to not only make voting more difficult, but a downright punishing exercise for anyone but conservative whites. One highly-publicized initiative would make it illegal to serve water or food to voters standing in line awaiting their turn to cast a ballot. Gerrymandering, reduction in the number of polling places, and restrictions on mail-in ballots are already crippling minority populations in their ability to exercise their right to representation.

Similar voter suppression laws are pending in forty-two (42) other states. This would appear to be an abuse of Article I of the Constitution that gives states the right to oversee federal elections, not to mention flagrant violation of the Voting Rights Act of 1965. Cancel culture is very real in these instances. Republicans are trying to cancel your voting rights, pure and simple.

Meanwhile, in Arkansas, the governor signed a bill that prohibits medical professionals from providing care to transgender minors. Considering the suicide and attempted suicide rates of youths who identify as non-binary, or as different from the sex they were assigned at birth, this bill can be considered a death sentence. It also violates the hypocritic oath to “first, do no harm.” Harm is exactly what such legislation does. It is an attempt to literally cancel someone’s identity, to erase them from existence in the legal sense.

It seems apparent that we cannot rely on even “blue” allies to stand up for the most vulnerable among us. Fine. Let us unleash our creative energies. Take to social media. Meme the hell out of this on Facebook with examples of real cancel culture. Hashtag the crap out of this on Twitter. Instagram this until that is all anybody sees. Overwhelm everything until we have justice.

We can also reward truly inclusive businesses. Donate what you can to organizations standing up for BIPOC, LGBTQ+, and other vulnerable demographics. Buy Potato Head for every toddler you know. Read them Dr. Seuss.