My wife and I are moving, from Colorado Springs, Colorado to Leavenworth, Kansas. I kid that we are moving to Leavenworth voluntarily, not as the result of incarceration, but the truth is that I am still not a willing participant. Her parents live there, and she wants to spend more time with them. I like my in-laws, so no problems there, but I also spent most of my adult life avoiding my own parents. Even now that both are deceased, I have zero interest in “going home” again. 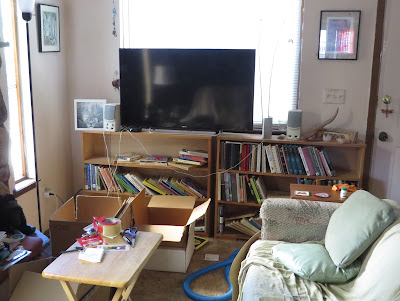 Like most men, I don’t do well when I interpret a situation as one in which I have no choices. This is especially true when it comes to expenditures that are required for home and car repairs, insurance, medical costs, and other non-elective expenses. Having no choice can also apply to relocation when you either agree with your spouse’s decision or start looking for a divorce attorney. In no way do I “blame” my wife, but I see the window closing on a more optimal retirement scenario for us.

I would have preferred moving farther south, at least. The more I age the more intolerant I have become of extended periods of cold, or rollercoaster weeks like we have here in Colorado. At least we have plenty of sun. Meanwhile, Leavenworth is best known for prisons, the fort, and churches, three institutions that I largely abhor. Mostly, I want to live in a place that reflects my identity, my appreciation of, and dedication to, equality, justice, and inclusiveness.

Over the years we have accumulated far too many material goods, and purging them has been painful. Going through my own parents’ belongings, journals, and keepsakes, and discarding most of it, has left me feeling like I have betrayed them once again. At a visceral level I can’t help but think I am erasing their existence, rendering them invisible and irrelevant. I know that is not the case, but my entire childhood was one of denying that their tumultuous marriage, and eventual separation and divorce, had no impact on me. Then, as an adult, the PTSD asserted itself and I became a crusader for the rights of children of divorce.

The pictures, the household objects, they all symbolize the anger, the longing for stability and peace, and the resentment of the absence of anything resembling normalcy. In retrospect, neither my mother nor father were properly equipped to be parents. My mother did astoundingly well in spite of that, but she was overprotective. My father was just flat-out angry all the time, or on the verge of it. “Mamma’s boy” and “you’re just like your father” were not compliments, and I could not do right by one parent without insulting the other.

My wife put their cremated remains in the same suitcase. I thought they were already there, and was surprised they had not burst into flames all over again. Not funny, really, but they had no reverence for me, either. Yes, I am spiteful. I can be mean and hateful, though I am more aware of the triggers now.

What has been even more painful is what we cannot find in the course of cleaning and packing. The self-portrait in graphite that I did in college is nowhere to be seen. I am most devastated at losing my own creations. I already sacrificed my insect collection, an endeavor of forty-some years. It was the right thing to do, donating it to a museum where it will be properly cared for indefinitely and made available to scientists around the world. Still, I can’t point to it and say “I did that.” That is hugely demoralizing. Like most men, I don’t do well with intangibles, either. There is no observable value to them. My identity is closely tied to what I have produced, if only because that is what our society demands. We must demonstrate concretely our accomplishments. That can be a topic for another blog post.

What am I left with? Where, exactly, am I going, apart from a small town? Why is it not enough to be taking my person with me? Why do I assume I no longer have freedom, in any sense of the word? What do I have left to do, to be? Where would I rather be? When would I rather be? Who am I really, and how do I reconcile the past and the future?