Party-crashers at the "Moth Ball"

I suppose no social event is complete without the uninvited or unwelcome guests that take it upon themselves to crash the party. The “Moth Ball” was no exception. Held at the home of David and Shelley Small in Athol, Worcester County, Massachusetts on June 13, the primary attendees other than Homo sapiens were members of the insect order Lepidoptera (moths and butterflies). The lack of explicit invitations didn’t stop some other insects from making the scene anyway.

I have learned quickly that among the most abundant and annoying insects here are mosquitoes. 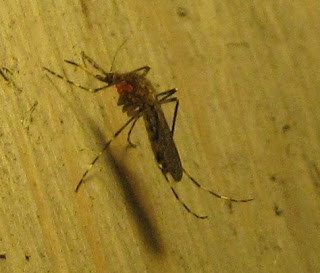 These biting flies of the family Culicidae are not attracted to lights in large numbers, but the people looking at other insects, exhaling carbon dioxide, perspiring lactic acid, and otherwise filling the air with mosquito attractants, are sure to draw them in. This one did not come alone, either. The red spots on its “chest” are not drops of human blood, they are mites, tiny arachnids that may be parasitic, or simply hitching a ride to some unknown destination.

Mites do not restrict themselves to mosquitoes. Well, certain species of mites certainly do, but other mites ride on their version of jumbo jets, like this large burying beetle, genus Nicrophorus, in the family Silphidae. 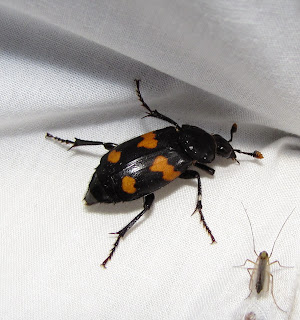 Burying beetles, also called “sexton beetles,” bury the carcasses of small animals like rodents, shrews, songbirds, and the like. They often work in male/female pairs to dig under the animal, sinking its body into the ground. There, the beetles excavate a chamber, and the female sets to work molding the corpse into a literal meatball, laying her eggs in a small crater atop the mass. She feeds the larvae that hatch until they can eat on their own, all the while grooming the food ball to keep it fungus-free, and fending off competing beetles that may sniff out her prize and try to kill her family to get it. Such parental care is rare in solitary insects. That these beetles are so boldly colored is a bonus to beetle aficionados.

Yet another intriguing beetle showed its face at the porch light as well. Maybe this male fire-colored beetle, Dendroides concolor used its “TV antennae” to home in on the action. 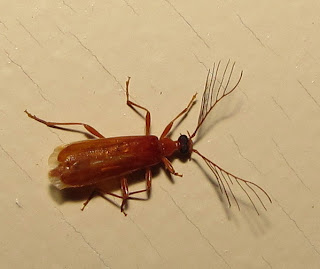 This nocturnal insect of the family Pyrochroidae also has huge eyes, the better to see in the dark. All kidding aside, the antennae are probably used to detect the pheromones of females of his species, as she boasts much less elaborate fixtures on her own face.

At least one other group of insects was easily mistaken for moths: the caddisflies of the order Trichoptera. 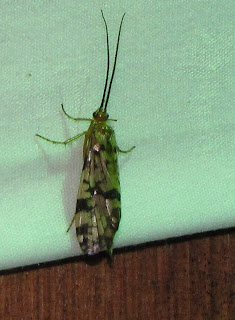 As larvae, they are aquatic, most living in flowing water such as streams and rivers, many of them building cases that are essentially “mobile homes” which help camouflage them and give them a place to retreat into should danger threaten. The adults are very moth-like and difficult for the casual observer to distinguish from Lepidoptera. This was one of many to join the soiree with the other insects.

Last but not least, were a few mayflies, order Ephemeroptera. They may have been fashionably late (the Moth Ball was in June, after all), but they literally showed up in coats and tails, their filamentous cerci streaming behind them from the tip of their abdomens. 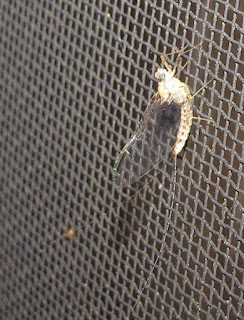 Mayflies are unique among all insects in that they molt after reaching adulthood. A “subimago,” prounounced sub-im-ah-go, emerges from the last larval skin of these aquatic insects, and then molts into a full-blown “imago” shortly thereafter. Their appearance at the Moth Ball may have been their only fling. Mayfly adults can live as short as one day, and probably not much longer than 2-3 days, just long enough to reproduce. Their youth, however, can take years in the case of some species, living as aquatic larvae (aka “naiads”).

Hopefully all these diverse insects found the party as entertaining as we did just watching them milling about in the rain. There is certainly no boredom to be found in the world of entomology.