Most moths are not terribly large. In fact, there are many which are so small that they are collectively referred to as “micros.” Then there is the other end of the spectrum which includes some species that have the largest wing surface of any insect. At the “Moth Ball” in Athol, Worcester County, Massachusetts on June 13, we had our share of behe-moths visit the lights.

Our giant moths were all in the family Sphingidae, known as sphinx moths or hawkmoths. They get the former name from someone who thought the pose of a disturbed larval sphingid resembled the pose of the Great Sphinx in Egypt. It was probably the same person who named the constellations. I sure don’t see any resemblance. “Hawkmoth” is more legitimate, as many of the sphingids fly rapidly, even hover in front of night-blooming plants to sip nectar from tubular flowers like Datura.

The first sphinx moth to show up was this waved sphinx, Ceratomia undulosa, a bit waterlogged in this shot after a night exposed to the elements. 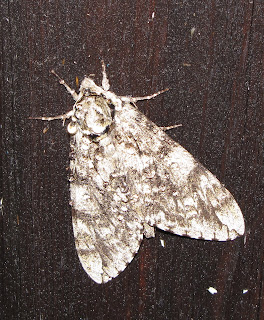 There are five North American species in the genus Ceratomia, and all of them look very similar to this one. 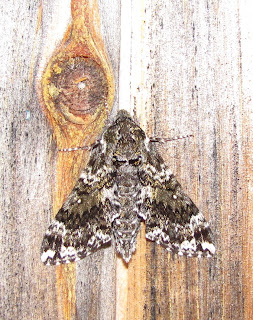 is named after the larval food plant, though the caterpillars will also eat blueberry, holly, and sweetfern. 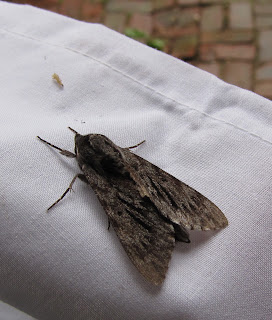 was downright diminutive compared to the other sphingids we saw, with a wingspan of only 4.5 to 6 cm compared to the 8-11 cm span of a waved sphinx. It looks all the more bedraggled because one of our party members rescued it from a puddle.

The only other sphinx moth I was able to get an image of was one of my favorites, a blinded sphinx, Paonias excaecatus. 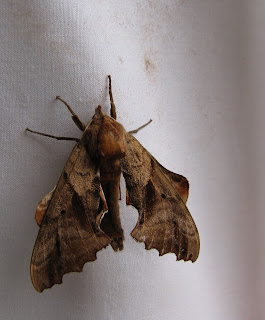 This large insect, no doubt a wilted leaf mimic at rest, is named for the striking blue eyespot on the hindwing, exposed if the moth feels threatened. Since it lacks a “pupil” in the center of the eyespot, it was christened with the handicapped moniker. It has a very wide distribution, too. I remember collecting this species in Oregon and Ohio, as well as seeing it here in western Massachusetts.

While serious entomologists might put out blacklights and mercury vapor lamps to draw in moths, simply turning on your own porchlight will lure many an exotic-looking lepidopteran to your doorstep. Consider making a project of recording the moths that visit your property. There are many wonderful online resources to help you identify them, including Bug Guide and the Moth Photographers Group to name just two. Above all, have fun just looking.