One of the great benefits to a rural existence, however, is the opportunity to view wildlife close at hand. I am thrilled to have discovered at least one pair of red foxes, Vulpes vulpes, living at the edge of the open field behind the house I’m residing in, and even have the images to prove it! 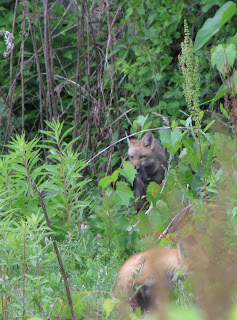 I’ve seen red foxes before, when I lived in Cincinnati, Ohio, and they frequent exactly the same habitat: forest edges that meet open, frequently “disturbed” areas. The field here is the former site of a pickle factory, long-since demolished and leaving the land vacant of most traces of its former industrial life.

This pair I’m seeing may be juvenile siblings, as they seem rather tolerant, if not careless. This one even returned to the open after sensing my presence previously, and laid down for a brief rest before trotting off again along a fenceline. 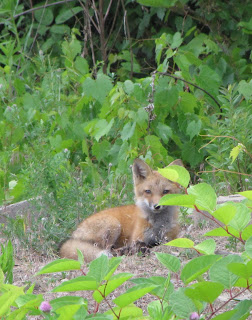 Either that, or there are more than two foxes. I’ve learned that red foxes breed in winter, and maintain their family unit until the following autumn, when the offspring go their separate ways.

They seem to be crepuscular, being active around dusk when I get home from work. This makes observing them a bit easier since I am not a “morning person.” Still, the dim light makes using my camera’s “Auto” mode problematic, resulting in blurry pictures even when the animal is not moving. Were it not for the twenty power zoom, I would have nothing to show here at all. The animals were a good forty yards away or so by my estimate.

The weather has turned rainy today, and looks to remain that way for most of the week, so I won’t have an immediate chance to see them again for awhile. Even then, I’ll be lucky if my best images are any better than this typical glimpse: Exit, stage left…. 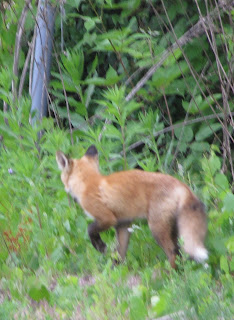