I had the pleasure of starting the new year among friends congregated at the Sierra Vista, Arizona home of Pat Sullivan and Lisa Lee. I got to make some new friends, too, including some of the cold-blooded variety.

Pat Sullivan has a wonderful collection of pinned insects, especially scarab beetles (see ”Bug Rooms”), but he also keeps a handful of live snakes. You can’t help but be captivated by such colorful serpents as this kingsnake. 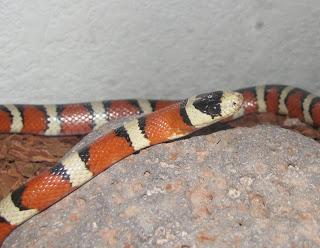 The last time I saw Pat he had sworn-off keeping venomous reptiles, but he had two on display this time. One was a truly lovely specimen of a sidewinder. 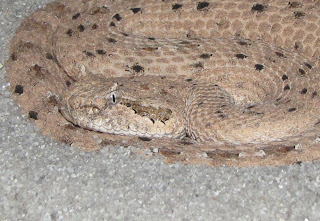 The other was a small but beautiful black-tailed rattlesnake. 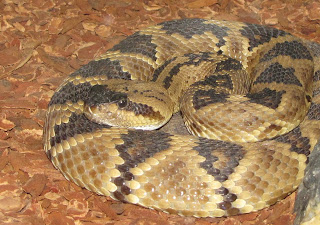 I have to admit I have a real fascination with the pit vipers, but have a healthy respect, too. I happen to be allergic to horses, from which antivenin is produced. Should I ever be bitten by a rattlesnake I would be in serious trouble! Behind the glass of a terrarium they can be admired closely, but safely.

Among the human guests I met was Bev Wigney, a very accomplished nature photographer who has some of her spectacular insect images in my Kaufman Field Guide to Insects of North America. We had corresponded over the internet, but it was serendipitous that we wound up meeting in person at the New Year’s party. Bev spends a good deal of time in Bisbee, Arizona, as well as in her home country of Canada. Be sure to check out her own blog, Journey to the Center.

After a night of eating, trading stories, and midnight toasting, some of us tucked ourselves in there at Pat and Lisa’s for the remainder of the night. This was the view I awoke to the next morning. 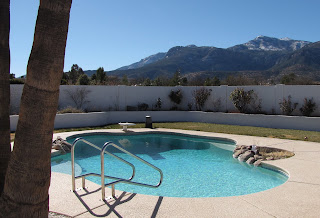 What a way to start the year. I hope that your year starts as sweetly, and that you find 2010 to be exciting and prosperous, but also stress-free.
Posted by Bug Eric at 2:33 PM