In keeping with my pursuit of animal-themed art here in the Old Pueblo, I bring you probably our most famous public art landmark, the Diamondback Bridge. 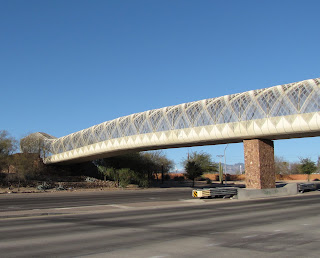 You have my apologies ahead of time for the poor images. I shot these late in the afternoon, but the landscaping around this bicycle and pedestrian overpass has also grown up a great deal and now obscures parts of the span.

The Diamondback Bridge, often mistakenly referred to as the “Rattlesnake Bridge,” was conceived and designed by local artist Simon Donovan back in 1997. It stretches 280 feet over Broadway Boulevard, just east of downtown Tucson. Well, depending on what your own research uncovers, it could be as long as three hundred feet.

The cost of construction was 2.3 million dollars, or 2.7 million if you consult another source. The artist’s fee of $24,000 covered the concept and “oversight” of the construction process. The San Francisco firm T.Y. Lin International did the actual fabrication and building.

Donovan was a stickler for detail and accuracy, replicating the serpent’s belly scales with precision in, well, scale. Each ventral segment is exactly two and one-half feet wide. 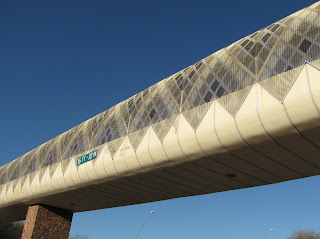 The engineers balked at this, insisting that the workmen would have great difficulty in negotiating such closely-spaced objects. Donovan was equally insistent on keeping the spacing to his specifications, and his wishes prevailed.

The project was completed in spring of 2002, with the grand opening on May 23rd of that year. It has since garnered a total of nine awards, including the American Public Works Project of the Year in 2003, and three engineering awards. 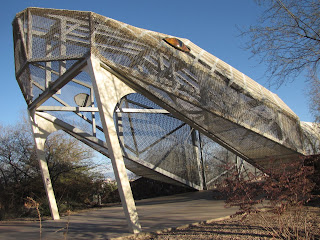 Not that the bridge has not had its share of critics. The most legitimate of those arguments cites the placement of the span. It really doesn’t go anywhere, dumping pedestrians and bicyclists at no particular destination. The immediate neighborhood is not all that safe, either.

Still, there is no disagreement that the design, execution, and overall appearance of the bridge is unique. The “tail” of the bridge even features a motion-sensor that sets off an amplified recording of a real rattlesnake’s alarming rattle. 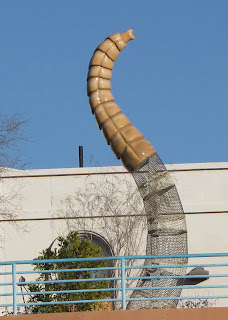 At the other end, the snake’s eyes light up at night.

Be sure to make a point of visiting this landmark the next time you find yourself in Tucson, and then you can come to your own conclusions.