For much of the winter the desert here in Tucson looks dead, nothing but earthtones in brown and beige. How delightful that for awhile back in January my neighbors down the way had a big, bright potted flower on the balcony outside their front door. After a little internet searching I learned that it is a common ornamental plant called an “Amaryllis” or “Barbados Lily.” 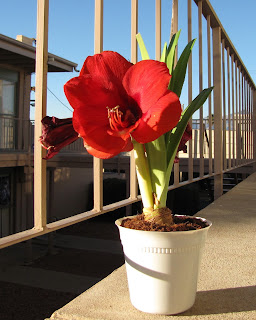 There can be come confusion over the name of this exotic-looking blossom because it is not in the genus Amaryllis. Instead, it belongs to the genus Hippeastrum. According to various online sources, the plant is native to Latin America, from Mexico to Argentina, and also some islands in the Caribbean. There are between fifty and ninety species, depending on where you go for information, and in the neighborhood of 600 hybrids. Most of the cultivars are produced in Holland and South Africa (where two Dutch growers moved in 1946), but some North American and Japanese horticulturists are making inroads into the market.

Hippeastrum sprouts from a bulb and has two growth phases, blooming in the winter months and producing foliage during the summer. Consequently, it has become an exceedingly popular indoor plant in temperate regions. Still not as popular as the poinsettias so abundant during the Christmas and Hanukkah holiday season, but perhaps their star is rising.

Prices and quality of Amaryllis vary, as learned from this wonderful blog entry at Plants Are the Strangest People. It is worth the brief read for the comments alone. 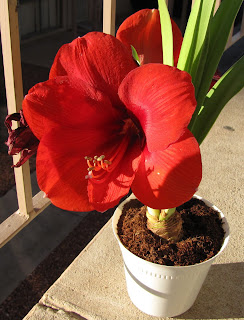 Shortly after I took these images, my neighbor took the plant away. Well, it was certainly lovely while it lasted, and it might spur me to start considering a houseplant or two. I could certainly use something to offset the “dead insect” atmosphere in my apartment.