Talk about a sense of being misplaced. Yesterday I found myself sent back in a time machine to the Triassic, Jurassic, and Cretaceous periods of geological history, courtesy of ”Walking With Dinosaurs: The Arena Spectacular.” 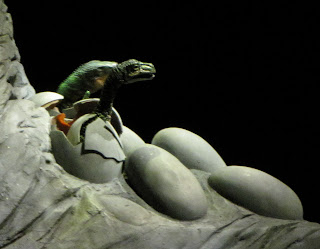 The seventeen life-size dinosaurs that are a part of this performance are just the tip of the iceberg. The entire production was a well-choreographed masterpiece of “edutainment.” The special effects were not confined to the dinosaurs, either. The whole stage metamorphosed to reflect the changing geological periods. Lighting created fire and rain. Plants bloomed, withered, and bloomed again.

This is principally a British and Australian creation, a fusion of BBC Worldwide and the Creature Production Company. Consequently, the quality was very high, but the acting and orchestral music were slightly over-the-top in places. 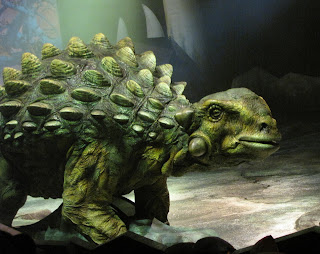 I had a seat that put me at about eye level with some of the shorter “creatures,” but I don’t think there was a bad seat in the house. These are not objects that need great magnification, and well-placed video screens furnished close-up and unobstructed views of each creature, and the correspondingly diminutive human host, “Huxley” the paleontologist. No discernible accent here, and his delivery was usually spot on, spiced with a couple doses of humor.

The visual detail of the dinosaurs was just stunning. No jerky, robotic movements here, everything smooth as silk, right down to blinking eyes. You really don’t want to be anywhere near the tail of the Stegosaurus. Smaller dinosaurs were costumed people operating the creatures as oversized puppets, so one did have to “suspend their disbelief” in some instances, but that was not difficult.

Oddly, the lighting throughout the show, including before it began and after it ended, was quite dim for the most part. Any flaws in mechanics, texture, or detail were surely obscured because of the dappled nature of the lights. 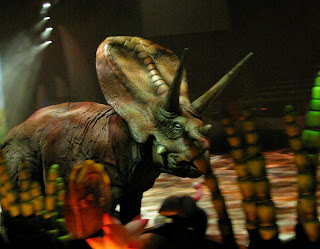 The only other complaint that one might possibly have, aside from the obligatory cheesy merchandise available for sale at exorbitant prices, was the volume of the music and the roars of the creatures. Apparently most arena productions assume we are deaf. I would rather not become so, and was somewhat sorry I had not brought earplugs.

All in all, “Walking With Dinosaurs: The Arena Spectacular” is deserving of the raves it has gotten on its lengthy world tour, which began in 2007 and will end sometime next year. Do check it out.

A few final notes: Still cameras were allowed at the Tucson Convention Center arena where I saw the show, but this may not be the case at all venues. Unless you are a professional photographer, I would leave the camera at home anyway. Dim lighting and surprisingly quick movements of the robotic dinosaurs did not afford many good shots; and flash photography was prohibited. 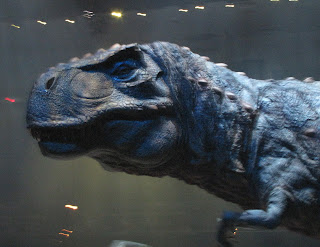