Among the many animals I saw on my visit to the Reid Park Zoo on February 14, perhaps my favorites were the birds. Many were quite large, colorful, close at hand, and otherwise camera-friendly.

Ironically, the two aviary exhibits were possibly the worst places to try and get pictures. Most of the birds perch high, not affording very good views, with or without a camera. The cage screening is either between you and the bird, or invariably shows up in the background. I did manage this shot of a curassow, a pheasant-sized, mostly ground-dwelling bird native to the New World tropics, but it was in the shade and trying its best to keep a low profile. 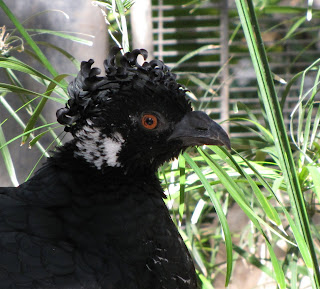 The best places to watch birds at the zoo were the large mammal enclosures, namely the zebra and rhino paddocks. The zebras share their quarters with a magnificent pair of African crowned cranes. The cranes did keep their distance, though, so it is thanks to the 20X zoom feature on my Canon PowerShot SX10 IS that I was able to capture even reasonably good images. 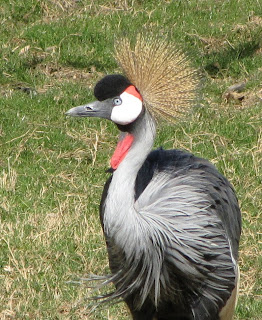 The variety in the texture of plumage on the crowned crane is truly astounding. Smooth wing feathers typical of most birds, but also coarse, straw-like feathers that make up the “pom-pom” atop its head, and the streaming plumes on its chest.

Also in the zebra pen was a flock of chicken-sized guinea fowl, decked out in snazzy polka dots. 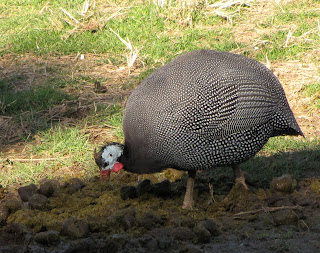 Yes, this one is pecking through zebra waste products. No accounting for taste, apparently. These birds are also native to Africa. 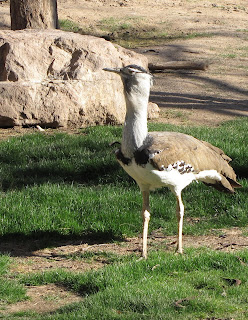 Standing between two and three feet tall (nearly one meter), and weighing in at an average of over 25 pounds as adults (males up to 18 kg), they are formidable predators of reptiles, insects, and small mammals on the African savanna. They also feed on berries and seeds.

What the marabou stork lacks in beauty it more than makes up for in size, as this was clearly the “king of the rhino enclosure.” Despite a clipped wing, this bird still managed to strut proudly through the paddock, standing prominently atop large rocks and other vantage points, and always keeping an eye out for a snack. 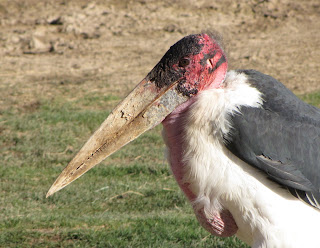 Interestingly, marabous are now more abundant in their native Africa than they were at the early part of the 20th century. Their rise in population is attributed mostly to a soaring human population and the organic waste we produce in the course of livestock production and agriculture in general. Adult male marabous can stand nearly 1.5 meters tall, and weigh over eight kilograms. Their wingspan is well over two meters.

I happened to be present for the feeding of the bustards and the stork near the end of the day (Reid Park Zoo closes at 4 PM), and boy was I in for a surprise. Stay tuned….