John Alcock’s book by that name is a truly delightful literary introduction to this season in southern Arizona. This particular year is made even more dramatic, however, by the atypically regular series of rains we have had over the last three months or so. The extra precipitation has resulted in a truly lush and colorful landscape. 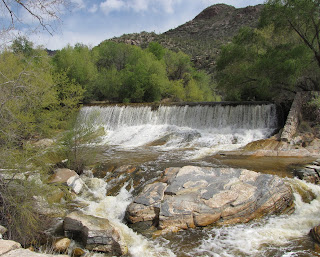 A trip to the Sabino Canyon Recreation Area on March 19, and to Esperero Canyon on March 27 revealed both creeks running full and fast. Both canyons are in the Santa Catalina Mountains just north of Tucson. The dam in Sabino Canyon was positively roaring with the cascading flow. Esperero Canyon is normally bone dry at this time of year, but the pools and riffles are a welcome sight there, too. 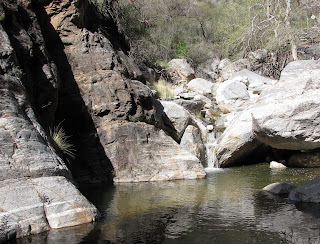 Elsewhere, the rain has soaked into the dusty soil and wildflowers have sprouted in an abundance not seen for decades in some locations. I usually lament missing the show, since the legendary floral exhibitions are usually a fair car ride away and I don’t drive. Imagine my delight in finding a wonderland only a short walk west from downtown Tucson.

Sentinel Peak Park is a city park that includes a butte of that name (known as “A” Mountain to locals, owing to an enormous concrete “A” on its eastern slope, painted in the red, white and blue colors of the University of Arizona), but the area immediately behind (west of) that promontory offers a more spectacular view right now. I discovered that a trail across the “saddle” between two other buttes took me through a glorious field of poppies, lupine, and other wildflowers. 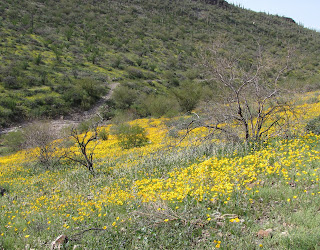 Here is a true “magic carpet” of fleeting duration, transporting one to a fantasyland of natural wonder. Where one would normally find only the gray-green of mesquites and cacti, here now are great swaths of yellow-orange, punctuated by spears of violet-blue lupines and white lyreleaf jewelflowers.

The floral fireworks may be just beginning. I see that the pink (and vermillion) globemallows have just begun to bloom, and soon creosote bush will be coming on strong, along with the palo verde trees.

I feel truly privileged to be a spectator of the season, especially this year. One of the other hikers I met in the park said that friends of hers who had been living in Tucson for decades hadn’t seen anything like this since about 1983. Indeed, a show like this is as rare as a comet in these parts. 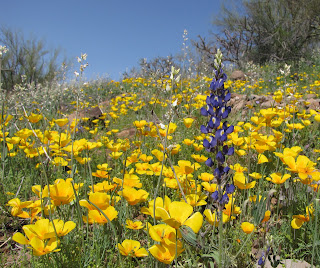