One of the many things I love about Facebook is that my nature-loving friends will note harbingers of the changing seasons. Lately, I have begun reading that some folks are already hearing spring peepers, a type of treefrog. Given the harsh winter this year, a more appropriate reaction might be “It’s about time.” 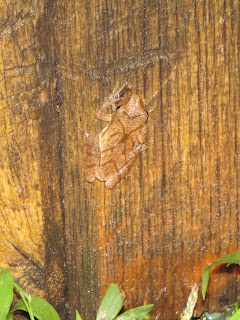 Spring peepers bear the scientific name Pseudacris crucifer, in reference to the “X,” or cross-like pattern usually evident on the backs of these diminutive amphibians. Mature adults are only two or three centimeters in length, but they make up for their small size with a big voice.

Males broadcast in synchronized choruses from a variety of wetland situations throughout most of North America east of the Mississippi River. The sound can carry up to a quarter of a mile. What you normally hear is the courtship song designed to attract females. The males are quite protective of their small territories, however, and another intruding frog will elicit a short trill of aggression.

Making a racket is risky, though, as you can also attract predators. So, there is something of a ventriloquistic element. Just try finding one in the act of calling, even when it is in close proximity, on the ground or on vegetation.

After mating, females lay clusters of eggs in a gelatinous mass under water, attached to aquatic vegetation or at the bottom of a small pond. In fact, a favored habitat of this species is vernal pools, temporary wetlands in an otherwise forested habitat.

Egg-laying can continue into the summer months, but the tadpoles hatch in 7-10 days, taking from five to eight weeks to metamorphose into tiny versions of the adult. The larvae are highly vulnerable to aquatic predators including turtles, salamander larvae, and even large insects like dragonfly nymphs.

You would think that tiny frogs known as “spring peepers” would be found in….spring. Apparently they are not limited to that season, since Dave Small, Lynn Harper and myself found one in a meadow in the neighborhood of the Quabbin Reservoir on the fourth of October, 2009. Prior to that, my initial encounter with Pseudacris crucifer had been at Dave’s home, where at least one frog sat patiently beneath the mercury vapor light, awaiting any errant insects that were attracted to it. 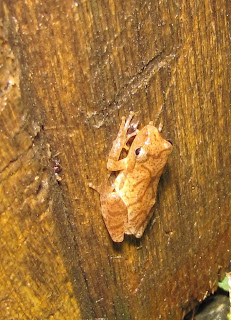 Here’s wishing that you hear your own springtime serenade any day now.