Monday, September 20, Malaysian government officials announced that they will not proceed with a planned release of genetically modified Yellow Fever Mosquitoes, Aedes aegypti (pictured below, on *me*), in rural and wild regions of that nation (source: Malaysia Today.com). The mosquitoes have been “engineered” to produce short-lived larval offspring. This is obviously an attempt to prevent delivery of the disease-causing organism by eliminating its vector. What I find ironic is that there are concurrent efforts being made to engineer malaria mosquitoes (genus Anopheles) that are non-lethal to the insects, but prevent them from being viable intermediate hosts to the malaria parasite Plasmodium. Quite a contrast between the two strategies. 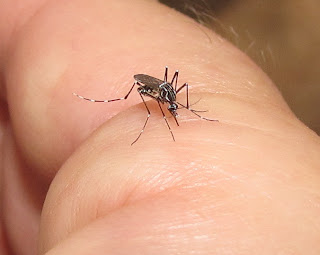 It can be argued convincingly that anything curtailing widespread mortality in “Third World” nations should be a high priority that will also aid in eliminating poverty. It can be argued that with current trends in climate change, tropical diseases will make significant inroads into temperate areas thus far free of such epidemics. It is also a fact that disease-causing organisms are developing resistance to antibiotics at an alarming rate. Why not shoot the messenger then: Attack the vector organisms responsible for ferrying those protozoans and other microbes.

The problems with killing off mosquitoes include a potential disruption of the food chain, whereby other organisms will be deprived of prey. Mosquito larvae also have their own role in filtering water. We cannot readily predict what the absence of mosquitoes would mean to ecosystems on even a local scale.

Interestingly, another article I read recently described how the “Brain tissues and the nervous systems of insects may provide the next line of antibiotic defense against emerging superbugs that have become resistant to drugs.” How do we know that the very cure for some of our human plagues doesn’t rest in the literal minds of mosquitoes? The point is that we haven’t examined all the possibilities. Before we assert a death sentence for a species, should we not mine it for all the “good” it could do? We are reticent to execute individual human criminals, perhaps in part because there might be something to be gained as a society by keeping them alive. We tend to be optimistic that way.

I tend to be optimistic about the most malevolent creatures we share the planet with. No creation, or product of evolution, is without some degree of merit, even if that grain of positivity has no direct bearing on human lives.

The “shoot the messenger” campaign has been seen before. Tsetse flies carry the trypanosomes responsible for sleeping sickness in humans, and “nagana” in livestock, especially cattle. Wild African mammals are immune to the disease, but serve as reservoirs for the parasite. Eliminate the tsetse flies and Africa becomes one big cattle ranch with no place left for wildlife. Is this an oversimplification? Perhaps, but the Law of Unintended Consequences factors prominently in cases like this.

We need to have meaningful dialogue about the direction that GM research is taking. The left hand needs to know what the right hand is doing, and profit from that information. I remain confident that we can overcome human mortality factors in a responsible manner that does not disrespect other creatures in the process. I still have faith that we can act responsibly in our own affairs of reproduction and population.